This is a guest post by Catherine Curnow, a ZigaZag reader who is currently volunteering at the Dolphin Discovery Centre in Bunbury.

If you’re visiting Western Australia make sure you take the time to visitBunbury’s Dolphin Discovery Centre, it’s only a 90 minute drive South from Perth.

Your entry ticket is valid for up to three visits so it also represents excellent value for money. A tourist from London told me recently that the centre is one of Western Australia’s best kept secrets and that we must get the word out to the world about what a fabulous place it is to visit!

After procrastinating for many years I started volunteering at Bunbury’s Dolphin Discovery Centre in January this year.

My first memory of Bunbury’s wild dolphins was as a child in the 1970’s. We could purchase a fish from the legendary Mrs Smith, and feed it to a dolphin in Bunbury’s Leschenault Inlet. Obviously we have since learnt that feeding the dolphins isn’t a good idea at all, because it makes them dependent on humans. Mrs Smith is believed to be one of the first people in Bunbury to elicit the dolphins’ trust in humans, and encourage them to interact with us.

Why I started volunteering with dolphins

One of the people who motivated me to start volunteering was a young woman who was teaching me to sing. Ferne was backpacking around Australia and although traveling on a shoestring budget she still managed to find the time and energy (between singing lessons and other jobs) to volunteer at the Dolphin Centre. Her enthusiasm was infectious and she had a wealth of information about Bottlenose Dolphins.

As it happens I had completely underestimated how exciting, enjoyable and rewarding this volunteering experience would be. I’ve had the pleasure of meeting volunteers and visitors from all over the world, learning about dolphins and other marine life, not to mention the exhilaration of interacting with dolphins really close up.

How many dolphins come into shore?

According to Jan, the Volunteer Coordinator, there are some 40 to 50 dolphins in Koombana Bay each day. Of these 8 to 10 visit the Interaction Zone regularly, and another 8 to 10 visit infrequently.

There are over 200 identified Dolphins  between Binningup and Busselton in the South West of Western Australia. February and March is both mating and calving time for the dolphins as they have a 12 month gestation period. So far this year 3 newborns have been seen in the bay. Most years they would expect to see at least 8 to 10 new calves.

You can imagine my excitement when I first saw a ten-day-old dolphin calf. It had wrinkly skin (called neonatal folds) and its dorsal fin was still a bit floppy. Its beautiful mother, Cracker, brought her to the interaction zone and proudly showed her off. The joy of this interaction is indescribable! To think that a wild animal would be trusting enough of humans to bring their new born so close is astonishing.

The volunteers are invited to vote on a name for the new calves and this new one has been named Cookie.

I became obsessed with dolphins at a young age and was determined to become a trainer or work with them somehow, so I trawled the internet looking for opportunities. Most things I found were volunteer experiences which were very expensive. I finally came across the Dolphin Discovery Centre in Bunbury.

At first I thought the interaction with them was not as exciting as more touristy places, because you couldn’t touch the beautiful creatures,  but later I realised that’s exactly how it should be. Dolphins shouldn’t be interfered with or tamed just for our pleasure. The fact that the ones in Bunbury choose to interact with people for their own amusement is even more intriguing than if they were trained and in captivity.

I’d been considering coming to Australia for a working visa for a while and as soon as I worked out the timing I had no other thought then getting as close as I could to this wondrous place. So I  flew to Perth and jumped straight on a train to Bunbury. I thought there would be some kind of waiting list or difficulty level in actually becoming a volunteer but the Centre is really geared and is mostly able to give anyone who wants the chance to volunteer the opportunity.

After moving from Fremantle to Bunbury Brian started volunteering at the Dolphin Discovery Centre. He enjoys seeing the wild dolphins so close to shore, and seeing the joy on the visitors’ faces. He also enjoys talking to the visitors. He says he’s been volunteering for 7 years, and still loves it.

Manon is from France and has been in Bunbury for a few months. She volunteers once a week. She finds it’s always a pleasure to see the dolphins and meet volunteers and visitors. The experience has taught Manon a lot about wildlife, and also helped her improve her English.

Thanks Catherine for a lovely story and so much information! I hope it will inspire readers to volunteer not only at the Bunbury Dolphin Centre but perhaps at dolphin or other animal centres all over the world!

If you’ve enjoyed this post, please drop us a comment in the reply section below. We love to hear your thoughts and Catherine will be replying to comments too 🙂

And if you love dolphins as much as we do, then here are some links to further posts for your enjoyment.

For more about Dolphins

Weird and Wonderful Facts about Dolphins,

Bunbury Dolphins and why a dolphin encounter can be life changing 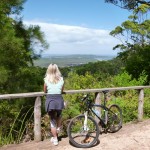 How to avoid Excess Baggage Fees 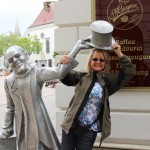