The enormous timber arches that span the South West Highway as you enter Manjimup are a dead giveaway to the town’s heritage, because it is the entry point to the great Southern Forests. 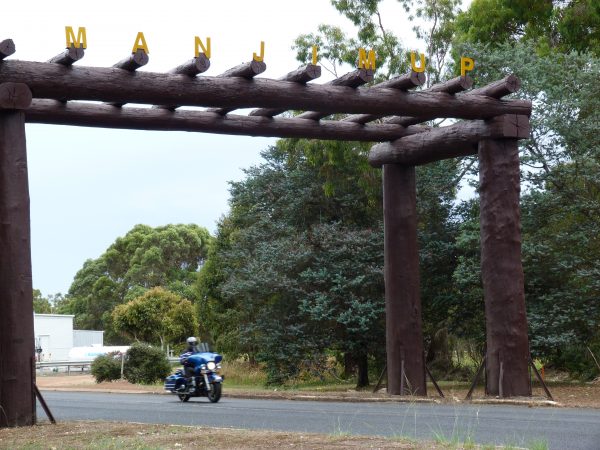 Manjimup’s history is inextricably wound up with the timber and logging industry, a business that was populated by hardy pioneers back in the 1950’s when life was tough in the remote regions of the South West.

The Magic of Manjimup.

These days the town feels laid back, almost magical if you take the time to wander its leafy surrounds and let it weave its spell. 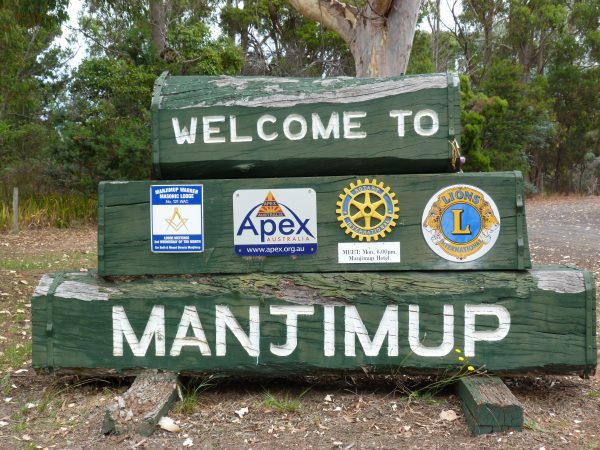 Timber is synonymous with Manjimup, but then so are Truffles a rare delicacy sought after for gourmet cooking. The Pink Lady apple was developed in Manjimup and although timber is the main industry it’s closely followed by fruit and vegetables, while on the leisure front there are scenic bike and walking trails, with parts of the southern Munda Biddi and Bibbulman tracks easily accessible.

On first glance though Manjimup WA is a pit stop, perhaps for petrol or a coffee, on your way south to Pemberton or Walpole. It’s only if you visit in December that you will be surprised by the purple rain of the Jacaranda trees. Should you arrive a little earlier in spring you’ll be treated to shows of delicate, wild spring flowers that pop up in the forests, and if you visit in late July you’ll be in time for the rarefied Truffle season.

I visited when my better, and far more energetic half, decided to cycle 90kms from Manjimup to Nannup along the most southerly section of the Munda Biddi track. The track meanders its way through karri forests and along the Donnelly River through some picturesque but also challenging, single track bike trails. As back-up-team my job was Support with a capital S, but a little exploration was not out of the question. 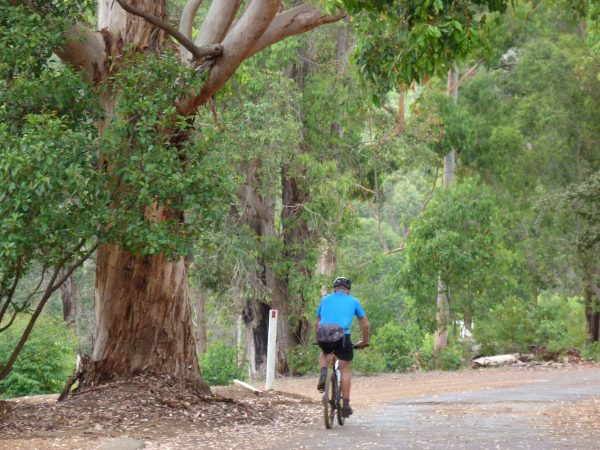 It was early. A mist was swirling and nothing was yet open except for the gates of Manjimup Timber and Heritage Park which is set on 10 hectares of natural bushland. Pathways lead under shady trees to various exhibits as well as the State Timber Museum (which depicts the history of the timber industry and logging), the Bunnings Age of Steam Museum and the Historic Hamlet, a selection of replica buildings that offer a peep into the hard but simple life of the early pioneers. It’s worth visiting to gain an insight into the town’s heritage.

My first designated rendezvous with Dave was at One Tree Bridge about 23kms from Manjimup. It’s a picturesque clearing showcasing a (defunct) old bridge originally built from one huge Karri tree felled in 1904, which was in use until 1943. I waited happily alone in the forest, enjoying the intense solitude. 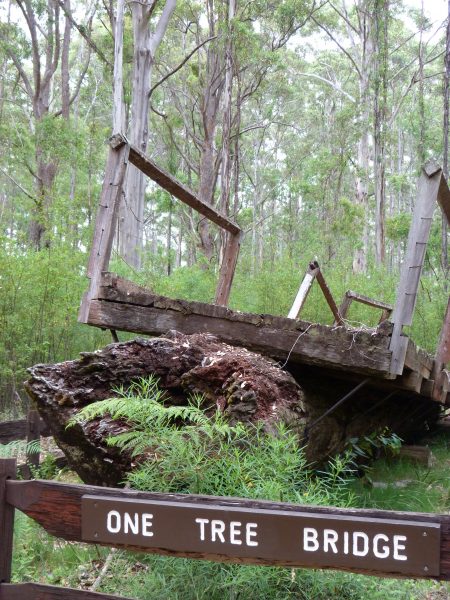 Dave emerged from the trees an unhappy biker because his chain had snapped and he’d had to push his bike for about 7kms. We regrouped and talked tactics, eating Pink Lady apples at nearby Glenoran Pool where there are picnic tables and a cool natural swimming spot. Then we drove back to Manjimup not expecting that the offending chain might be repaired. But fixed it was at a bicycle shop conveniently located in the town centre and we decided that Manjimup was magical, conjuring up a new bike part just when we needed it.

When I’d waved Dave off into the forest once more, I visited Dingup Church which was built in 1896 and used as a school and church by early settlers after which I spent an interesting time weaving and imagining stories of the past from fragments of information on the melancholy tomb inscriptions at the Pioneer Cemetery.

Our next pit stop was to be at Donnelly River Village which is set on 150 acres and surrounded by State forest about 25kms from Manjimup. The drive took me through farmland and thickly wooded areas along ribbons of tarred road where even though it was Christmas holiday season, I encountered few cars, and those I met seemed to be in the middle of the road as if surprised to see me coming in the opposite direction. 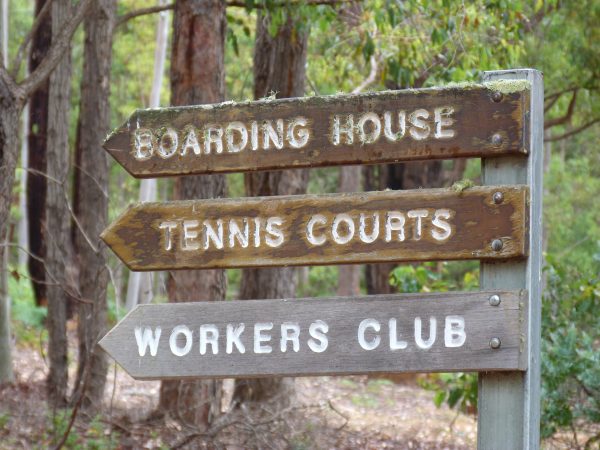 The Kimberley may have vast open spaces of big sky and distant horizons to make you feel insignificant, but the South West can also make you feel very small and remote from civilization with its lonely roads, endless forests and scattered habitation. 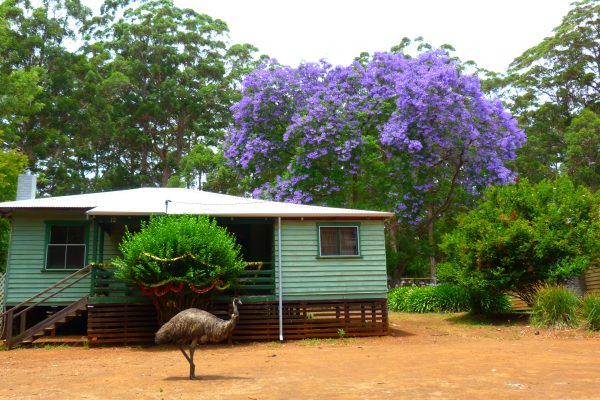 Without fanfare a sign to the left announced the village; a preserved historic town now a nature based holiday destination. Here the air was still, devoid of man-made sound, quiet except for the intermittent sounds of nature; the call of kookaburras, the squawk of purple crowned lorikeets, the click and whirr of crickets, and a rustle of wind in the tall trees. It felt a little spooky as if ghosts of the past are alive and well, but then I’m sure many holidaymakers would disagree because this old mill town is now a popular destination particularly for families with children who are after the shack-in-a-forest experience with safe biking and play areas, and 400 metres away is Donnelly Lake also surrounded by Karri trees, a pleasant spot for BBQs, swimming and canoeing.

Still there’s a feeling of living history and an almost reverential silence to the place as if some kind of magic might be at work. Silence would not have been a word much used in the 1950’s when the timber industry was thriving and men were encouraged to cut as many straight karri logs as possible, their payment often being free beer. In those days the noise of steam locomotives, the cracking of axes against hard wood and the grinding of saws would have been the predominant sounds.

According to John A Tillman in his book Donnelly, Men & Mill (1991), the shop was built in 1952. Now it’s a General Store which also houses the country café, and next door are the original workers club rooms. There are 36 self-contained, heritage listed, weatherboard cottages for holidaymakers which were originally the timber workers’ homes.

Dave set off for Nannup in a thunderstorm and wind lashed through the karri trees. It’s one thing contemplating fires in the forests, quite another storms and big winds that bend, twist and sometimes snap the branches of the overhead giants. Given the weather conditions I was worried about his safety, but he made it to Nannup a couple of hours later, only a little worse for wear, as if protected by the magic of Manjimup.

For the best prices on accommodation in Manjimup we book with Booking.com

10 Things to do in and around Manjimup

Have you visited Manjimup? What would you suggest seeing or doing? 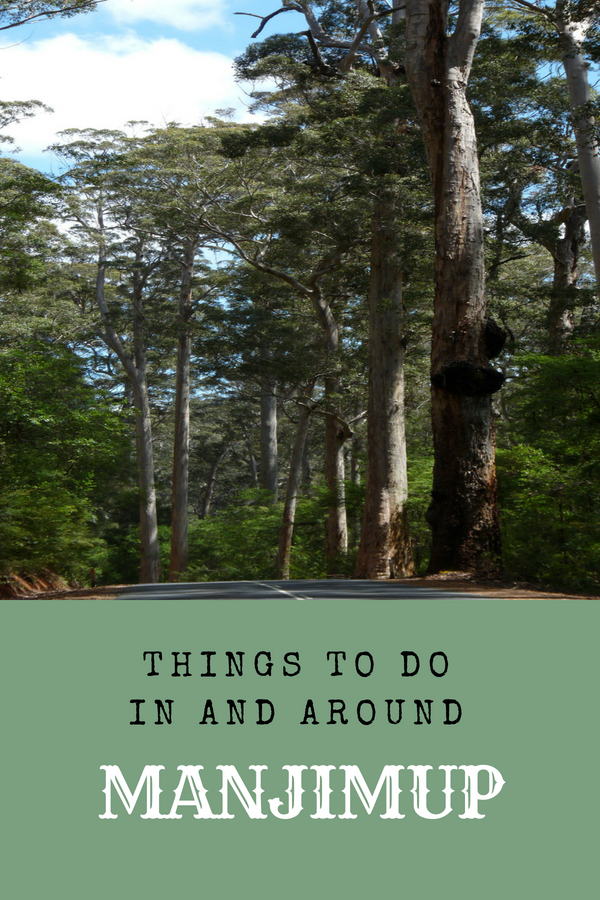 manjimupThings to do in Manjimup 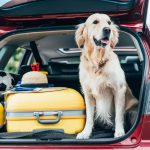 Travelling with your Dog around Western Australia 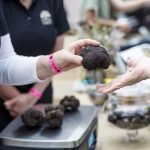