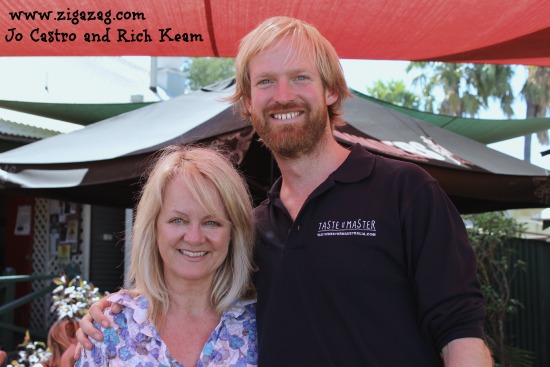 Western Australia is an extraordinary State, and who better to let us into a few insider secrets than a very special Guest Poster today, Rich Keam, who has one of the best jobs in the world. Yes Really!

I met  lovely Rich in September  when we were sampling some rather extraordinary beers at a brewery in Broome, and since then he’s gone on to have some amazing adventures.

Over to you Rich!

One of the Best Jobs in the World

Hi. My name’s Rich, I’m from the South Coast of England and this year won the role of Taste Master of Western Australia in conjunction with Tourism Australias Best Jobs In The World campaign.

In short, I’m a lucky bugger.

To read all about my travels visit www.tastewesternaustralia.com

I’m four months in to my role, my waist line’s expanded quite a bit, and here are some highlights so far.

Rich: This is the Bungle Bungle Range in Australia’s North West. It’s about 350 million years old. 350 MILLION YEARS OLD!! I had to sit down to take that in. I was lucky enough to see it from the air as well. It’s truly spectacular. 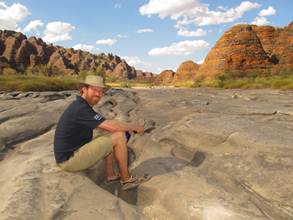 Jo:  What a Great Number 1 Rich! And I know what you mean! It’s hard to think in terms of those mind boggling numbers. My hubby is a geologist, so he gets all that … but I was a bit like you, a little gobsmacked. I bet you loved the walks and Cathedral Gorge? The helicopter flight is something else isn’t it! I’m busy writing about an 11 day trip we did to The Kimberley…  A Billabong, 5 rivers and a Hoochery

Rich: Ahhh, my first day at work! Catching huge mud crabs with Indigenous guide Brian Lee up at Cape Leveque. Here we are cooking them over a beach barbie after catching them,  armed only with a long metal pole and hessian sack. 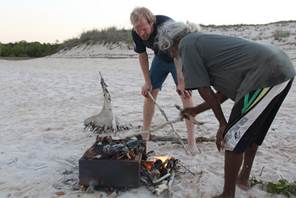 Jo: Not a bad job if you can get it! What a fab experience this must have been, and so early on in your “Taste Master’s Job”.  I bet they tasted good and so, so fresh. Just wondering if you’ll be attempting anything like this, using similar implements, back in Britain? Lol!

Rich: I think this has been my favourite place to stay in Western Australia so far, I was lucky enough to spend a couple of nights at the El Questro Homestead in the Kimberley. They only have space for 18 guests and you’re situated right in the heart of one million acres of wilderness park. 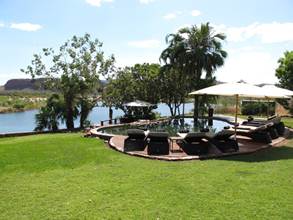 Jo:  Oh gosh! The Homestead is to die for! We only had a little squizz of the outside, it’s truly rock star I believe. I have to say the camp site is also wonderful as it’s got lots of shady trees and it’s set on the banks of the river.  El Questro itself is an amazing wilderness park – bet you loved Emma Gorge and the hot springs? For more about the Kimberley … Why You Should Escape to The Kimberley and  5 Kimberley Gorges to see before you die

4. Margaret River and the South West

Rich: This is Fraser Gallop winery in Margaret River, one of the boutique stars of wine making in the Australia’s South West. I didn’t realise how GREEN it was in this corner of the country, with rolling hills and woodland. The area’s known for its premium vineyards, great beaches and world class surfing breaks. 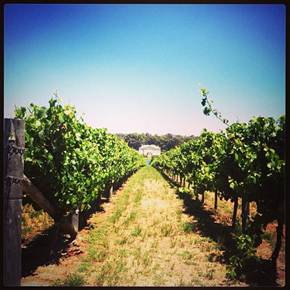 Jo:  Seems like you’ve enjoyed exploring our neck of the woods. You’re right though, it can be so green and quite at odds with people’s perceptions of WA as a mostly sunburnt, generally flat desert without a single bump in sight. I’m lucky to live in Bunbury, so we often pop down to Margs for lunch at a winery, a bike ride or a beach walk, at the weekends. Here’s a little more about Bike Rides and the region in general: You had me at Food, Wine and Beer and Top 10 Things to do in the Margaret River Region

Rich: Margaret River Gourmet Escape is a three day culinary celebration with top chefs and wine buffs from all over the globe attending, sharing their secrets, hosting cookery master classes and holding intimate Q&As. Imagine the best food festival you’ve ever been to and times it by a zillion. It’s the foodie event of the year! 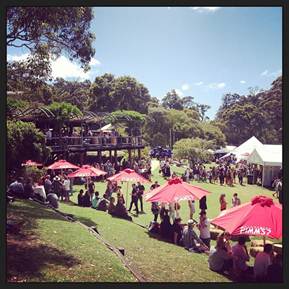 Jo: Don’t know about you Rich, but I stuffed myself full of the region’s best produce and finally ended up quite bloated under a shady tree with a bottle of Margaret River’s finest while oggling my hero chef, Rick Stein in action (he comes from my neck of the woods in the UK). Here’s my little round up: Margaret River Gourmet Escape

Rich: I like a bit of history stuff and I like a bit of art stuff, so travelling round the 965km Golden Quest Discovery Trail in the Golden Outback was perfect. You learn all about the gold mining rush of the early 1900s and visit actual prospectors tin houses from the day. En route you’ll also get to see Anthony Gormleys fantastic living art exhibition “Inside Australia” at Lake Ballard salt lake. 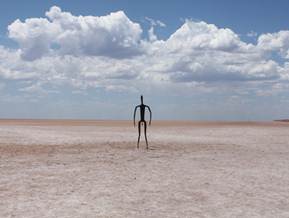 Jo:  Wow! The 965km Golden Quest Discovery Trail sounds like an amazing experience, must put that on the list. I visited Kalgoorlie for a few days in October and was bewitched by its Wild West style architecture, the tales of Paddy Hannan and the discovery of gold – and and let’s not forget the colourful brothels! Well Well!  Kalgoorlie, The gold capital of Australia.

7. Fishing and Foraging in Shark Bay

Rich: Look at this picture. LOOK! On those rocks are oysters and we chiselled them off with a hammer and screwdriver, chucked them on a beach BBQ and had them for tea. I also caught a Blue Bonefish hand line fishing and we ate that too. This is at Shark Bay on the Coral Coast, at a secret location I’m not allowed to divulge! 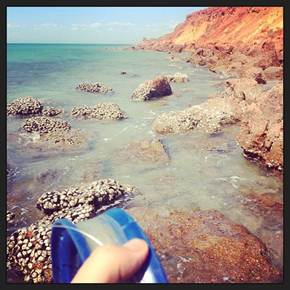 Jo: Aww, this looks just too pristine and wonderful … no wonder you’re not allowed to divulge its whereabouts! Yum, fresh oysters for tea – hope you had a glass of bubbly to hand as well! I also love Shark Bay, especially the dolphin encounters at Monkey Mia. Here are some Weird and Wonderful Facts about dolphins .

Rich: Perth is such a welcoming, friendly City it’s gonna be hard to leave when my contract ends in February. A 30 minute ferry ride off the coast is Rottnest Island. I think EVERYONE here has had family holidays on the island!

Rotto Fast Facts:
No cars allowed, only mode of transport is bicycle.

The Quokka, a small friendly marsupial, is native to the Island.

Rottnest has over 63 beaches and 20 sandy bays. Yowsers! 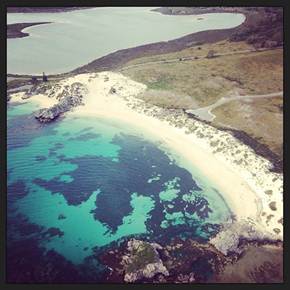 Jo: Rotto is a gem, isn’t it Rich. I can remember being gobsmacked by the colour of the sea, and just coming across bay after bay as we cycled around was incredible given that it’s such a small island.

I’m not surprised you’ll be sorry to leave Perth – we hope you’ll return soon. Who knows perhaps you’ll make it home one day? Why not come and Join the ‘WAvolution’ I say 🙂

Here are some more links to Perth’s attractions:

Podcast : Things to do in Perth and SWA

The night it snowed in Perth

Fun things to do in Perth at night

Rich: Here am I with new pal Bradley Cooper, he’s Western Australia’s off Road Racing Champion. We’re punching the air in celebratory fashion as we’ve just driven at over 200km/hour around a dirt track in preparation for the annual Kickstarters Gascoyne Dash. It’s a 500km race across the desert starting from Carnarvon on the Coral Coast. 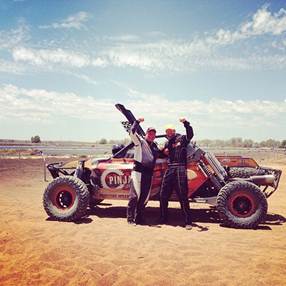 Jo: Isn’t WA extraordinary!  The things we can do here, the wide open spaces to explore and the unique events there for the taking if you have the gumption. Which it seems like you have … what an adrenalin rush this experience must have been. I haven’t been to Carnarvon yet.

However, I have been to Broome, which is where I met you, at a brewery, a couple of days after you first started your Taste Master job, so in memory of that I’m going to include a couple of helpful  links to Broome’s attractions here instead 🙂 along with a pic of the camels on Cable Beach that I love 🙂

15 Amazing things to do in Broome

The Oldest Outdoor Theatre in the World

Rich: This is from the Giant Tides Last Light Tour at Cygnet Bay Pearl Farm in Australia’s North West. They have the second largest tidal movements in the world up there, and we were witnessing it all from a speed boat. It’s not in the picture but after the tour we were treated to an eight course pearl meat degustation feast. Lucky buggers. 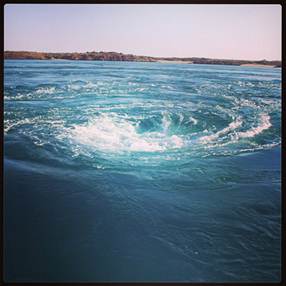 Jo: Lucky Buggers indeed! That must have been one helluvanexperience.

Thanks so much Rich! This is an awesome selection of some fantastic destinations and experiences in Western Australia. I really appreciate your time in compiling this post  because I know how super busy you are (eating, drinking and enjoying yourself!) but here’s hoping we can keep on following your exciting adventures via your videos and your lively blog at Taste Western Australia.

Rich Keam, the winner of WA’s ‘Best Jobs in the World’ Taste Master role, is a 35 year-old who hails from the United Kingdom.  You can also follow Rich’s unfurling story  on Twitter  @richkeam  and  tastemaster_wa  on Instagram.

For some other great places around the world this Christmas why not pop over to Travel Photo Thursday? Where in the world is your favourite place? 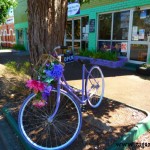 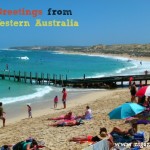 Greetings from Western Australia and The Year that Was 2013.