Four Reasons in one day.

Great things to do in Margaret River and the surrounding area


As we often do, late on a Friday, we decided it was time for a little quest. And as we often do we decided to head south to the Margaret River region.

Early Saturday morning as the parrots were beginning to squawk in the Tuart trees outside our house we loaded our bikes onto the car and headed south, nursing hot mugs of coffee to wake us up.

We stopped first at Cowaramup, a small township about 10kms north of Margaret River and parked beside the quaint and interesting row of nikky-nakky-noo shops shops that are a feature of the town. Cowaramup is known as ‘cow town’ to the locals, and it’s easy to see why!

Look out also for the ‘rump on a stump’ a golden cow on a huge stick in the pretty town park.

Our first quest of the day was to do some exercise, enjoyable exercise out in the open.

All set, and we were off to cycle the 26 km round trip from Cowaramup to Margaret River through the dappled light of the forest, along the old rail trail that once ran all the way to Augusta. The last train chugged along here in 1957 and it’s now a bike and walking trail,  quite flat and if you’ve got older kids in tow they’ll probably manage ok too. 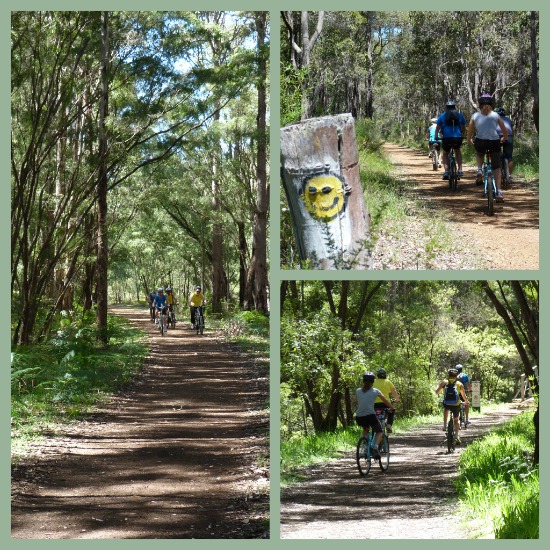 In Margaret River we passed a busy Saturday craft and produce market before stopping at our favourite brekkie spot – The Margaret River Bakery, a quirky and chillaxing place to quaff a cappuccino and crunch a croissant while just watching the world go by.

The summer heat was beginning to build, definitely a prelude to the scorching hot WA day we were in for – Seabreeze said the temperature would likely top 36 degrees, but the ride back through the shaded forest was still bearable.

What to do next?

Riding time. One and a half hours. Distance completed – 30 kms  after a slight detour around Margs.

Once we’d stashed the bikes onto the bike rack, Dave asked.

“Well, what shall we do next?”

I knew he didn’t mean what to do next in the context of their being nothing to do, but rather in the vein of what to choose from so many things to do in the area.

Anyway, because we were hot and sweaty and the weather was beachy we decided to head to Prevelly and stopped off at Surfer’s Point to watch the surfers then went to the popular Gnarabup Beach, 10kms from Margaret River, for a cool dip after our exertions. Don’t forget that Sea Gardens cafe is close to here – a great place for a glass of wine or a cold beer and a pizza.

Gnarabup is a great beach for swimming, on the one side of the jetty the sea is quite calm, while the surf is good on the other side. Non swimmers and beach voyeurs on the other hand, can sit and make merry at the adjacent  White Elephant Café which overlooks the bay.

Gnarabup is also a favourite beach of ours because it has shower and changing facilities, and after swimming I was able to tart myself up a little and put on some glad rags and lippy in preparation for lunch at five star Voyager Estate.

The majestic entrance sweeps between the vines and it’s impressive not least because the thing that first diverts your attention is a massive Australian flag billowing in the breeze.

Voyager is built in the Cape Dutch style of architecture and reminiscent of wineries in the Stellenbosch and Franshhoek region of South Africa. It has the most amazing ‘werf‘ gardens, walled in the Cape Dutch style, over 1000 rose plants and a rose walk under an arbor, definitely a place I would think for great wedding photographs if you are considering tying the knot any day soon. And one for the tip box – remember, November is probably the best time for roses.

The cellar door is set in a cathedral like space with a small gift area and tables elegantly set for guided tastings which are comprehensive but not free. What is complimentary though is a wine tasting consisting of four wines from the wine list, any more than that and you’ll pay $5 a taste.

After some wine tasting we chose the Voyager  Sauvignon Blanc Semillon to have with lunch, but then had a hard decision to make.

Should we go for the chef’s taste plate or the full degustation menu pared with wines?

Today, because of all the Christmas over-indulgence we opted for the tasting plate for two, followed by scallops and Harvey beef which were indeed the very best of new Australian cuisine served in a way which made them a feast for the eyes.

We loved the Margaret River Venison Chorizo with a selection of voyager estate condiments, we adored the fusion of the master stock pork belly with paw paw salad and ginger lime dressing, and revelled in the chicken liver parfait with Shiraz Jelly and almond bread. Everything was superb, and despite this being our third experience of Voyager, even with some familiarity of the restaurant, we found it difficult to fault.

For two hours we sat in the rarefied surroundings, discreetly elegant as they are with long wooden tables, comfy armchairs, views onto the gardens and a huge fireplace for wintertime, and we chatted about the difference between small family run wineries of the region and the larger ones, such as Voyager, Leeuwin and Watershed – which are all in the same area.

If you are looking for small and intimate, then none of these three wineries are the ones to pick. However, having said that, and despite the sometimes corporate feel, you will not be disappointed by either the food or the experience at any of these estates. The service is slick, the food and wine will be fantastic, the investment is huge, and the grounds are magnificent – the only misgiving is that the charm, ambience and passion of a family owned estate can sometimes be a casualty of corporate ownership.

Feeling very full, we nearly headed straight home, after all we had completed our quest of ‘Four Reasons in one day’, but Cowaramup was looking too pretty and we decided to pop into the Margaret River Regional Wine Centre – the nice thing here is that they showcase nearly all the Margaret River wines and can offer wine tasting and sell mixed cases of 12 wines from a selection of the region’s wineries, some of which don’t have cellar doors, and some of which are not so well known.

We also popped into Candy Cow, because it’s irresistible whether or not you have kids in tow or not, and tried some of the delectable home made fudge, nougat and honeycrunch,  and chatted to the friendly owner Norm Williamson who took over the well established business 5 years ago. It’s a kid-trap to say the least! When you open the door, you’ll understand why it’s such a child’s dream.

On the return  journey I was at the wheel, having opted to be the skipper, and thirty minutes later by the time we approached Busselton  I was hot and bored.

“Let’s stop for a walk and maybe a swim.” I said

And so we did, cruising easily into a parking spot right by the beach. The 1.8km wooden jetty stretched into the distance and little did I know then but our son was fishing from the jetty and had we walked along we could have had a chat and maybe taken one of his fish home with us to cook up for dinner! Gotta love this South West lifestyle.

However, the sea wasn’t doing it’s normal Busselton super troppo calm turquoise blue thing this afternoon and even looked a little choppy, so we opted for a cool off paddle and then pushed on home for a nice sundowner.

Sundowner and a Flying Fish

And finally, sitting by the swimming pool with some cheese and biscuits as the sun cast fiery orange slashes across the sky we opened one of our finds of the day:-

By the way I’m linking this post to Mosaic Monday at Little Red House. Pop over and see some of the other lovely photo mosaic posts if you have a moment.

Have you had a big day out anywhere over the Christmas holidays? Why no share and let us know in the comments section where you went and what you enjoyed most.

Watch this space – coming up next – 3 Wineries with a Difference. 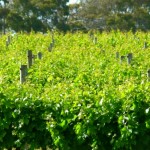 Wineries in the Geographe Wine Region. Here’s a hidden gem likely to blow your socks off.

How to lose weight the healthy way. A Quest and a Question from WA.