Why you have to visit ‘sleepy’ Perth before it’s too late to catch the zzzz’s.

“Know what?” I said last Saturday as we were wandering around the all but deserted city streets of Perth.

“Perth isn’t a city for the week.”

“I disagree,” Dave retorted. “It’s anything but. It’s a city for the strong – steeped and built on hard work and the red dust of places such as the Pilbara and the Gascoyne.”

“No I mean ‘Week’ as in ‘Days of’ I laughed. “You know, in the week you can’t get a hotel room at a decent price and the streets are full of people, but at the weekend it’s cheaper to stay here, and there only seems to be a handful of tourists wandering around.”

Yes, it’s a city for sightseeing on Saturdays, Sundays and some public holidays. The office workers have disappeared to the suburbs or they have headed down south or up north for the weekend, and the streets are free of the rush of traffic.

Tip. Perth hotels are less expensive on weekends, and the city is easier to drive around – no gridlock or hustle and bustle like on weekdays.

Look around and you’ll see Perth’s steel and glass towers rising out of the earth like beacons, as if heralding in the era of the resources giants and Western Australia’s part in this chapter of the moulding of a continent.

Perhaps the growth of the nouveaux riche has led to the death of Perth as the quaint backwater of Australian capitals, but all is not lost for in amongst this chrome and vitreous mining magnet, plans have been set in place, and the cogs are turning to ensure that development is accompanied by a renaissance of the city CBD which will enhance old favourites and exude a new vibrancy.

The Lanes are one example. Once slightly seedy, dingy backwaters of the city, they are being revamped. I can’t wait for more to be peppered with bars and bistros and individual shops.

I’ve been in SWA for four years, and when we arrived I had to admit that Perth felt, well, a little sleepy. But as we walked around last Saturday we were suddenly aware of how rapidly things have been changing right under our noses.

We had been sleeping ‘down south’ while a renaissance had been burgeoning in the ‘big smoke’.

“That’s new!” I said as we walked in hot summer sun from Hay Street to the very new Perth Arena where international stars such as Pink, Neil Young and The Script are soon to play.

I thought what a magnificent modern structure it is, and in a great position because it’s going to connect to the railway – how easy is that if you come to watch a sports game or music event?

“But where’s the railway station gone?” Mrs-country-bumpkin asked in dismay as I saw that the old station had all but disappeared and turned into rubble.

The main train station was just a skeleton of its former self and I hardly recognized it.

“It’s all going, or gone underground,” Dave replied and we saw the huge earthworks taking place as we crossed to get over to the Art Gallery.

Fondly, I remembered back to our early days in Australia…  my 5.30am starts from home (when I didn’t want to drive up to Perth because even then I felt the roads were too busy) when I would catch the early morning Australind train from Bunbury. The slow train to Perth, stopping at all the country towns  and arriving at the city’s characterful old station at around 8.30am.

I remember how seedy we thought the area close to Northbridge was when we’d been spat off the plane (that’s what it felt like) on our very first, very hot day in Australia with only four suitcases and a lot of wonder and anticipation.

Soon the city will merge seamlessly into Northbridge and the area will be revitalized with new shopping areas, and Perth will not anymore be chopped into two by the railway, so there can be no ‘good’ or ‘bad’ side anymore.

The waterfront down by the Swan River is also in for a revamp and extension, like multi million dollar extension. Many disagree with what’s happening, but as a relative newcomer I’m looking forward to being able to enjoy a more extensive waterside experience. I’m thinking Sydney Harbour or Cape Town waterfront – there’s plenty of scope to make it more interesting in Perth.

A Pact about Perth

Anyways, I’ve made a bit of a pact with myself not to fall asleep for another four years, because I might not recognize Perth ever again if I do. I’m already wondering where I’ll be getting off if I ever catch the Australind train again.

Have you been watching Perth’s renaissance – do you like it or hate it? Or what changes have you noticed most over the years? 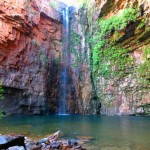 An inside Guide to a Waterfall Wonderland in The Kimberley Outback Australia.

How to get the most out of a Writers Festival and a glimpse of a Perth weekend.