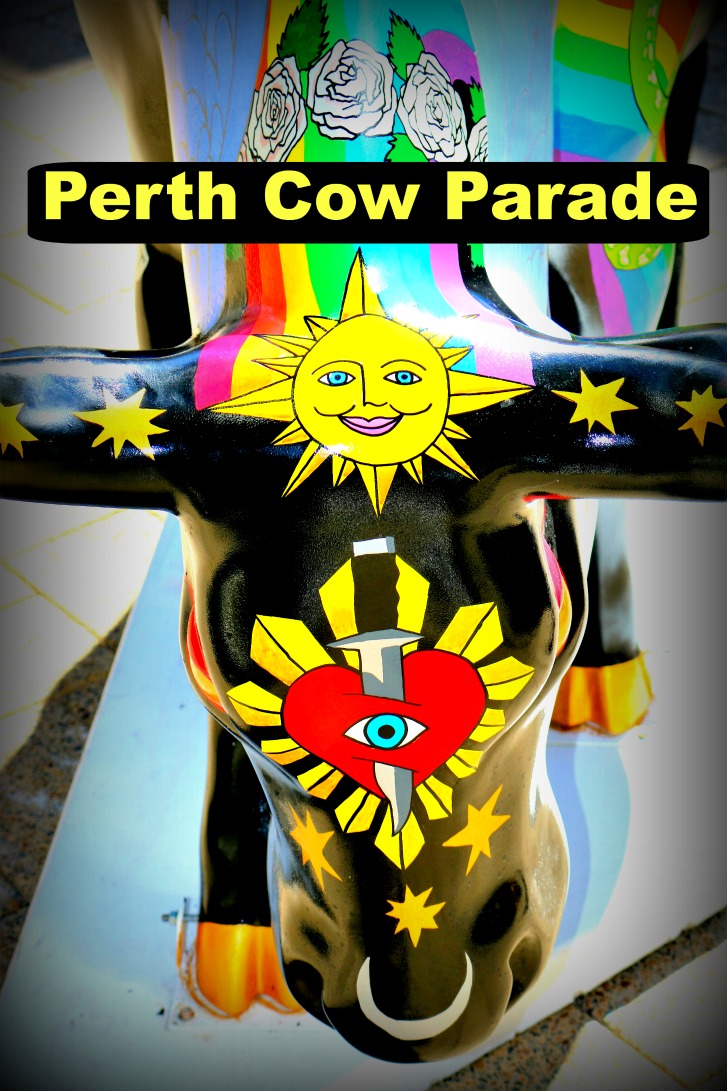 But we were up early and out of the house because we were on a quest : To hunt down the cows that have descended onto the streets of Perth. 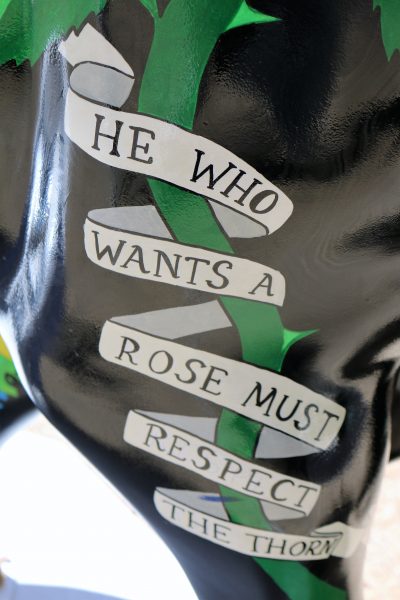 Because, from 31 October to 11 December 2016 the City of Perth is hosting the largest public art event in the world.

It’s also taking place in America – A lovely reader from my other blog,  Lifestyle Fifty, wrote to tell me that she’s been enjoying the same event (with different cows) in San Luis Obispo County. 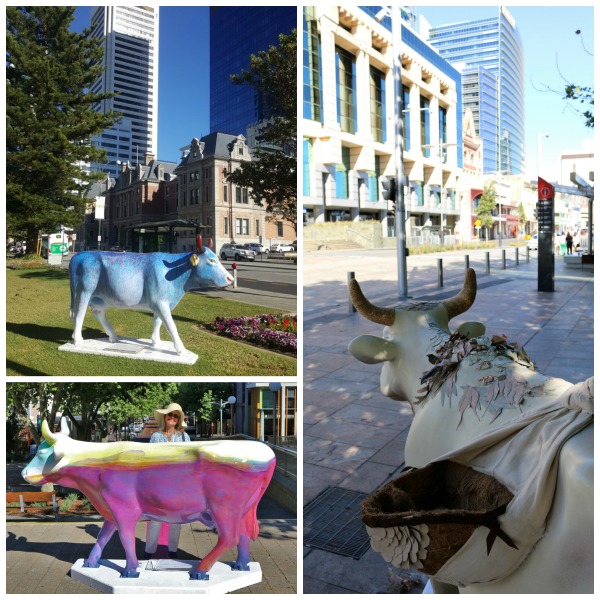 According to the official blurb: “Perth joins other major cities such as New York, Paris and Tokyo who have previously hosted CowParades across the globe. The cows arrived as blank canvases and have been crafted, sculpted, painted and reconstructed by some of Western Australia’s artist and hottest fashion designers. They’ll be exhibited throughout city malls, parks, iconic building and precincts with some being auctioned at the 2016 Lexus Ball for Telethon, raising money to support child health research.” Find out more about the Cow Parade as well as what’s on in the city by visiting The City of Perth Website. 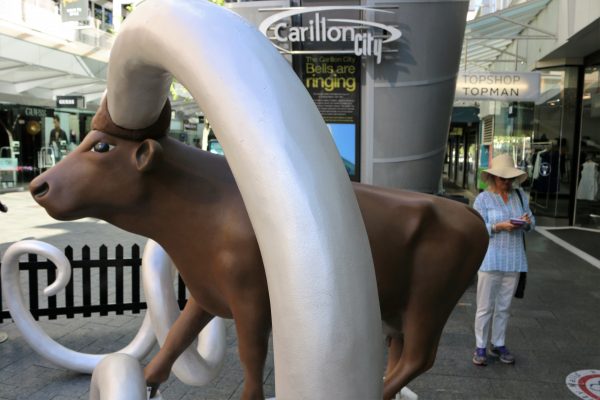 There are 40 cows dotted around the CBD and Northbridge precinct with some at Elizabeth Quay, 2 at Claisebrook Cove, and also 6 community cows in the JH Abrahams Reserve at Crawley, which everyone can  help decorate.

In the 8 years we’ve been in WA, we’ve seen such a change in the Perth urban landscape, and the contemporary arts scene. And we LOVE it! 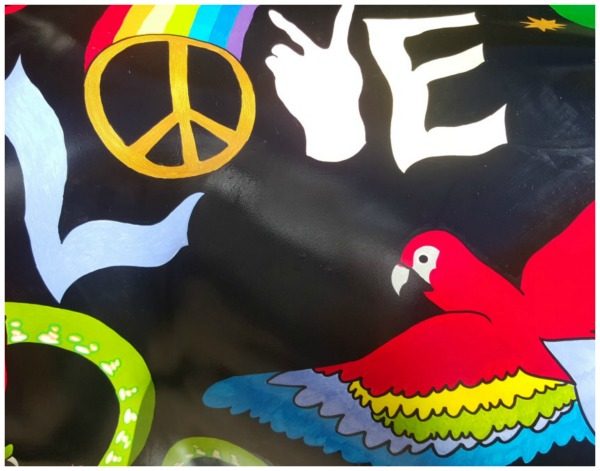 With the underground sinking of the rail lines to link Northbridge and the CBD, construction of Elizabeth Quay, the proliferation of street art in the form of giant murals, the restoration of heritage precincts into bustling hives of coffee shop, and bar activity, we can really see a push to bring to life the forgotten laneways of yesteryear – soon Perth will be able to challenge Melbourne  😉 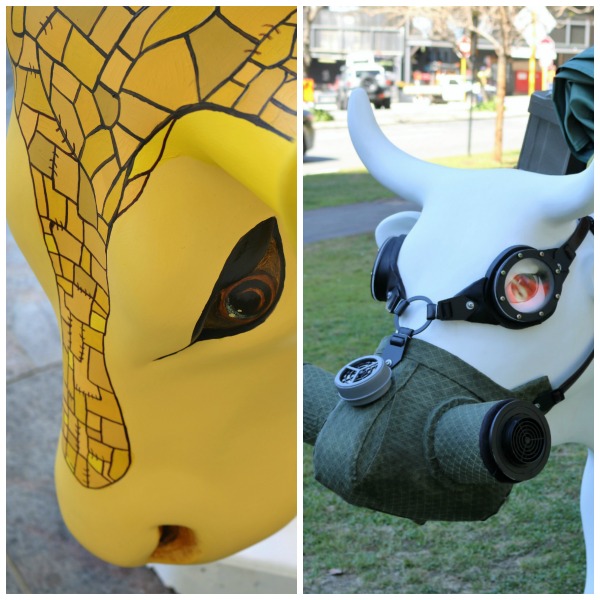 But back to the cows. Perth’s an easy city to walk around, so armed with a map we spent 3 hours exploring and managed to see 20 out the 40 cows on show. 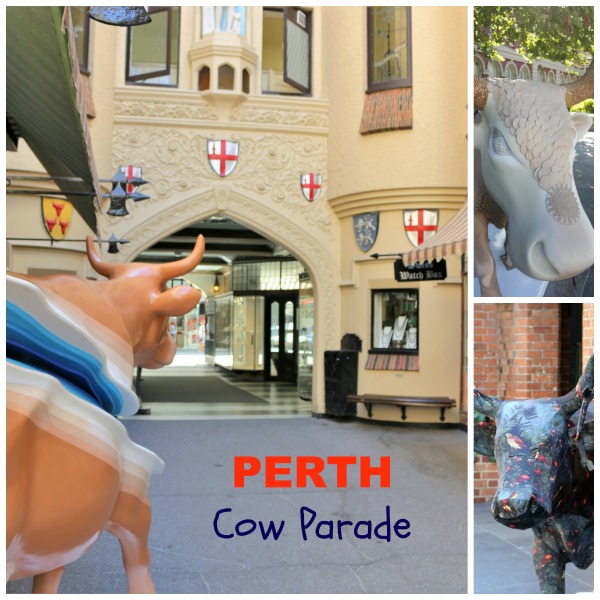 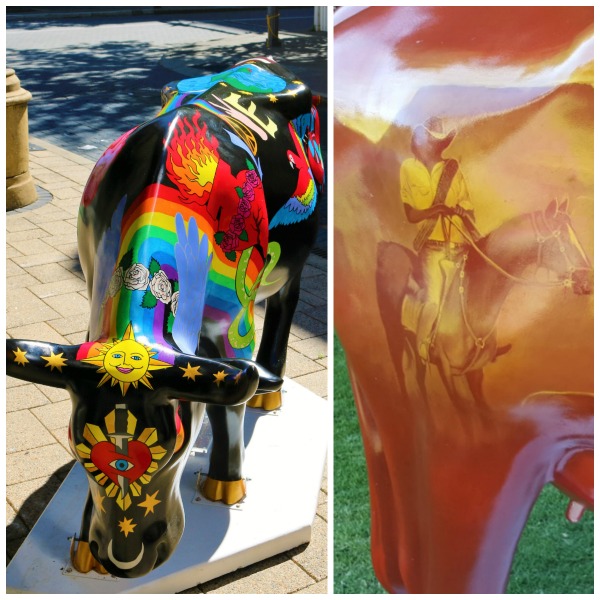 We love the idea of public art being accessible to the people. Placed in our built environment the juxtaposition of the art, the architecture and city scape provides an extension to the artist’s canvas, in this case, the cow.

We never miss going to sculptures by the sea at Cottesloe Beach each year, another wonderful interactive art project which is like an open air art gallery – not to be missed.

In the Perth Cow Parade, Dave’s favourite was a cow named Alice (not a town!) see below and above right. 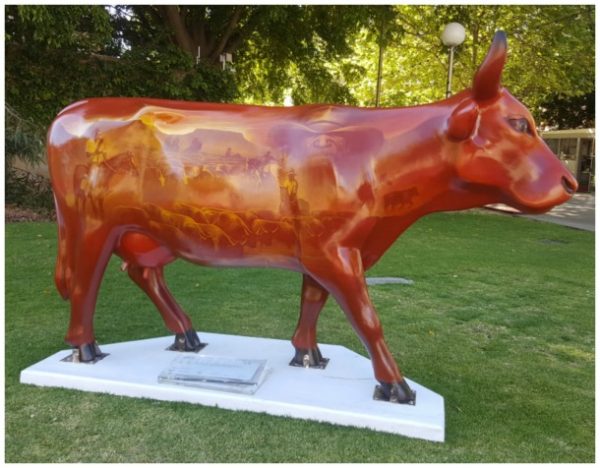 Located in the Perth Cultural Precinct, near the State Library, the art by Lance Chadd is inspired by an Aboriginal stockman. The chocolate coloured cow presents an apt canvas to showcase the colours of northwest stock scenes, and the art suggests stories of adventure and stock runs under the big sky country up north.

My favourite was Garden Cow, by Megan Salmon, below, which you’ll find outside Cloisters on St George’s Terrace. 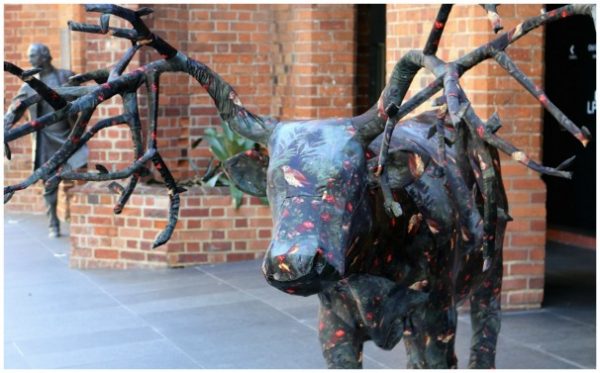 This cow has been covered in a beautiful original digital fabric created especially and inspired by a mural from Pompeii (which appealed to me because we recently visited Pompeii on a Princess Cruise’s world cruise this year and the ancient murals there were fascinating).

Garden Cow is covered with greenery and birds, and the mural is hand sewn onto the cow. Growing from the cow’s horns are a myriad of antlers like trees or roots rising up from their garden beds.

Two of the cows we saw in Perth posed challenging questions to us all regarding the relationships between man and domesticated beasts. Commodity Cow, by Lisa Dymond, located outside of His Majesty’s Theatre, below, is one example. Lisa’s inspiration is drawn from how we domesticate and control animals as a commodity. Walk around to the other side of this cow to see a defining and confronting object 😉 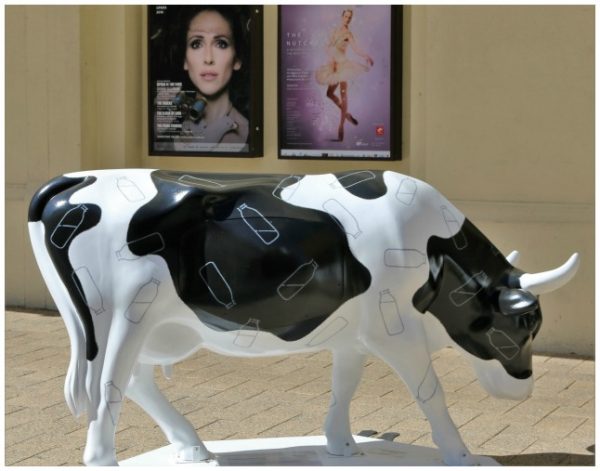 A Cow With No Name by Peter Ellis, at the Western End of St George’s Terrace, below is not to be missed. And the inspiration for this work is drawn directly from images of horses, dogs and donkeys that were used as beasts of burden during World War 1 and 2, and aims to encourage debate about the relationships between domesticated animals and their masters. 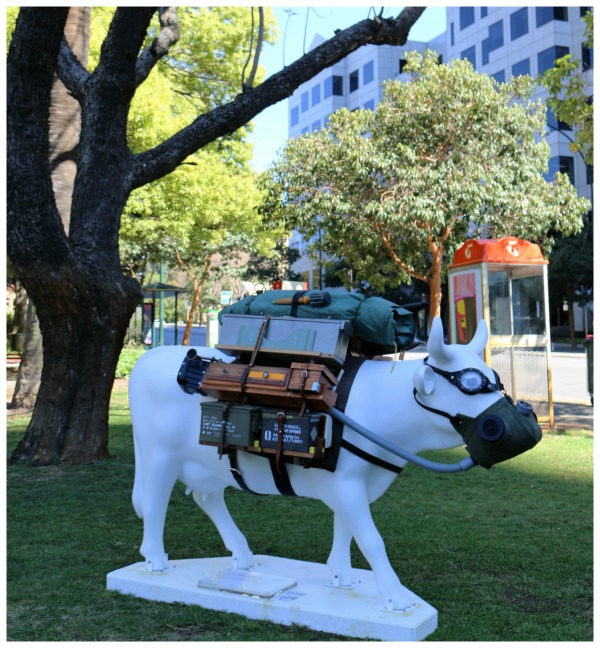 Cows in an urban setting

A number of these bovine beauties cleverly reflect their environment.

Bubble Gum Bessie, by Minaxi May, is a tasselled and tinselled beauty located under the striking wall mural at 140 off Wellington Street. 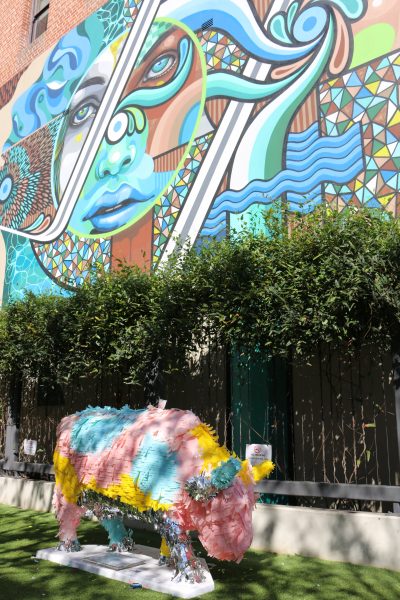 Palindrome, by Helen Smith, is a striking white cow with silver geometric stripes encircling its body which reflect the facade of the State Theatre beautifully – its silver steel rods hanging down dramatically from roof to floor forming blinds to the windows. 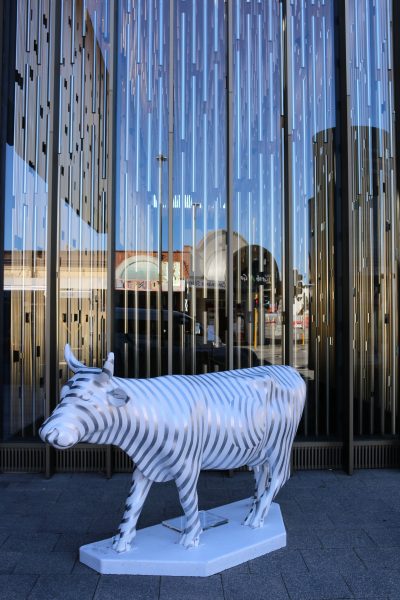 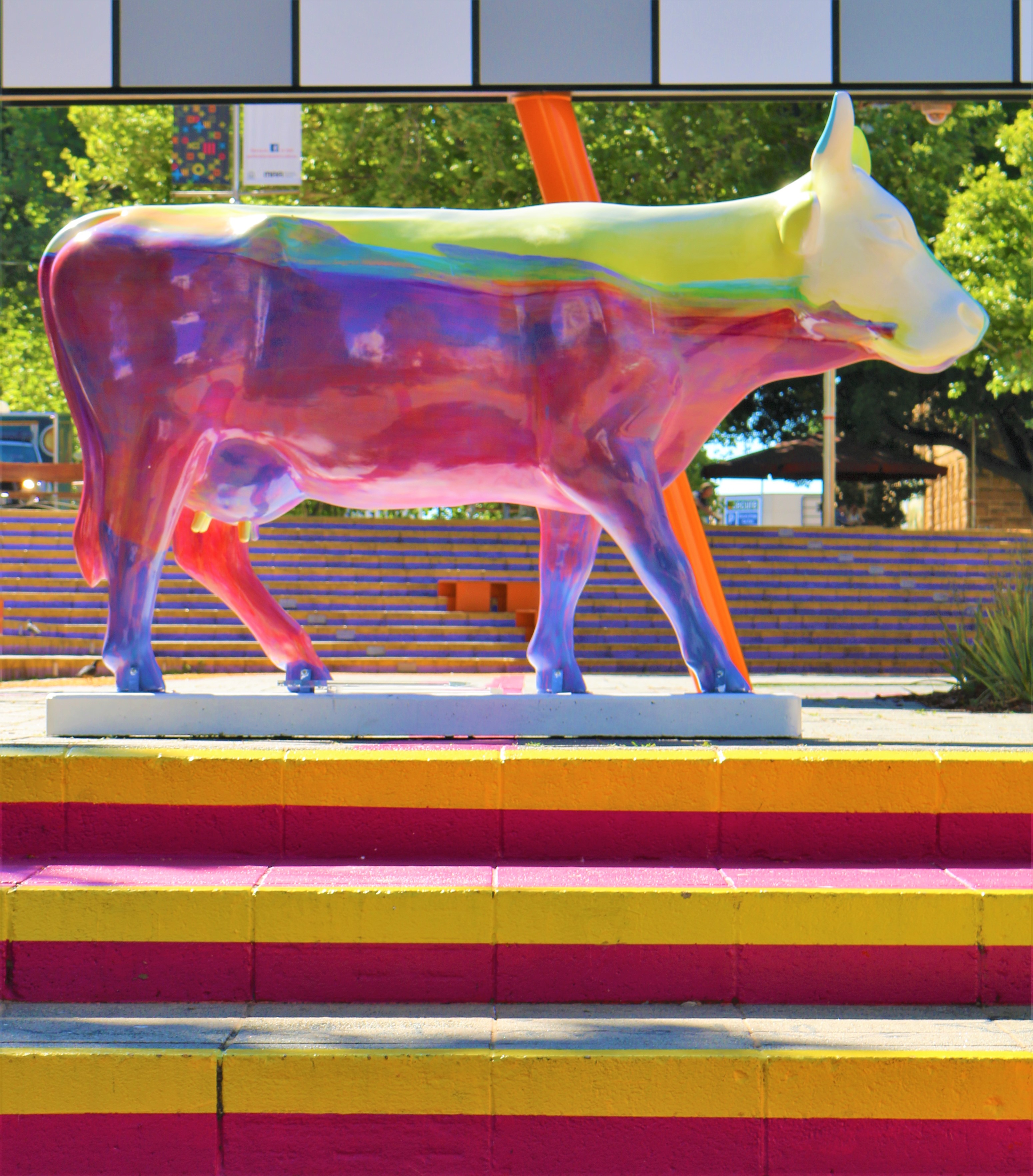 To find out what’s going on in Perth, what you can do for free, why it’s extraordinary, and all sorts of great stuff you might like :-

If you’d like some mini versions of Cow Parade cows to buy as gifts – then check these out – they’re so gorgeous! [easyazon_link keywords=”Cow Parade” locale=”US” tag=”souswawri-20″]Cow Parade[/easyazon_link] memorabilia and gifts. I think they’d make unusual and quirky presents for friends.

Disclaimer: This post contains an affiliate link and should you purchase I stand to make a small commission at no cost to you. Thanks for supporting my blogging endeavours. 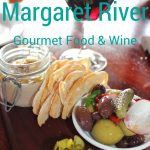 How to make the most of the Margaret River Gourmet Escape 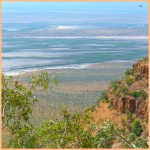 Top Things to do in Wyndham – Kimberley Region