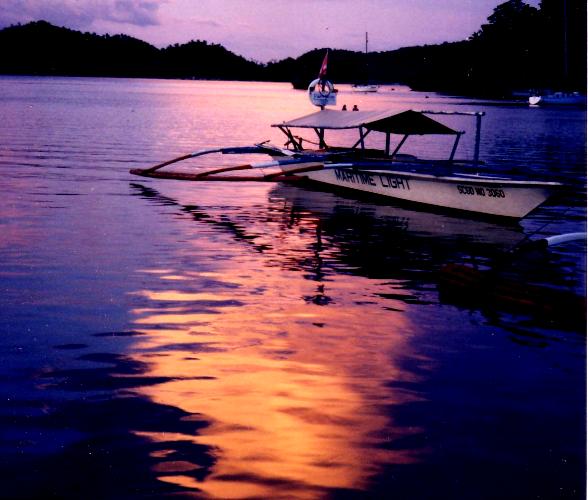 Guess where I went not so long ago? Beautiful island, fabulous beach, climbed up Mount Pinatubo , visited a drop-dead-divine-destination  such as Puerto Galera pictured above?

Nope,  today my travel story is from Manila The Philippines and how I unexpectedly ended up with some ‘ladies of the night’ in a down-town nightclub.

What happened that night in the streets of dubious repute?

Alright, I can hear you muttering – what on earth is a big boned, wide hipped, large boobed woman of indeterminate age and European extraction doing down in the streets of dubious repute, amongst the svelte Asian beauties of the night?

“Let’s go to a girlie-bar,” the boys had said after a particularly good Pork Adobo at a Manila restaurant one Friday evening. So the choice was either to go home alone,  plead to be taken to the sterility of a hotel bar on my own, or stick with the boys who wanted to be out on the town.

Four good-looking blokes and wizen-faced old me trotted off  to a place with a name full of promising innuendo. In fact each place we passed had a name which my escorts thought conjured up pictures of  bare-breasted Page 3 girls in tabloid newspapers or Baywatch Babes.  The boys were quite beside themselves with excitement.

We had a hard job picking which nightclub to go into and the boys seemed like kids in a sweet shop trying to decide, but decide they did, and in I followed, full of misgiving but fuelled with a few glasses of vino.

A black velvet curtain swished past my face.  The darkness enveloped us, and a swathe of black lace wriggled about in the mid distance. It looked like a sort of black sea. Out of this living mass jutted silver poles behind which was a huge mirror. Lots of people seemed to be admiring themselves in it.

Was this a rehearsal for a movie?

Several men waved excitedly to my male escorts, in a welcome of bravado, and then froze when they clapped eyes on me. I froze too, because to my horror I recognised men I knew – some had connections to my girlfriends in the suburbs, and these men now seemed to be growing extra limbs. At any rate, they had two heads, one with shiny long black hair, and an extra pair of silky thighs wrapped around them them. I couldn’t help thinking, we’d walked in on a rehearsal for Alien 4.

Anyway, these blokes must have been training with Houdini in their spare time, because when (after my initial shock) I looked up to say, “Hello”, they were gone. Goodness knows where. They just seemed to disappear. “Poof”, they’d all been whisked off into the night, leaving their attachments behind.

So suddenly it was me, and four fellas. I might have been invisible. Nobody paid me the slightest bit of attention after that. The men sat at a little round table and squeezed me out. I couldn’t believe it.

Instant Nirvana for some

Barely-clothed, would-be contestants for Miss Universe engulfed the boys like quicksand, and soon appeared to be hanging off every limb. Now I’m not averse to a bit of healthy voyeurism, but this was ridiculous. A similar fate had befallen others who sat there with Cheshire cat grins spread like runny honey all over their faces.  Honestly, they looked like they’d died and gone to heaven. And they still had all their clothes on.

“Mmm, what?” one of the boys answered, “just order what you want.”

“With who?” I asked, tugging at his sleeve getting a withering look from a doe-eyed girl about a quarter the size of me.

“Whatever, just order,” he replied, his eyes all sort of glazed over.

I left them at that little round table with their visions of instant nirvana and stomped off, quite dramatically I hoped, to a quieter place where six petite supermodels were draped across a wooden bar.  I felt a bit like Gulliver in Lilliput. Not even on a lifetime diet of cabbage soup would I ever fit into those netty things strung over their lissome figures.

Daring to ask the questions that count

“So?” I smiled at the one who gave me a flicker of a smile. “So.” I repeated a little anxiously realising that this was pretty much enemy territory and I might be whisked out of here by the same route those other blokes had mysteriously disappeared earlier.

“Wanna drink?” Someone asked. I said I did, and then I realised I’d just bought all five of the girls a drink too – not that they seemed to actually drink anything. Ah well, the boys were paying – and they wouldn’t be counting the cost by the look of things.  I tried to ignore what was happening at the bar and downed my drink in one.

“So? What are nice girls like you doing here?” I stammered, avoiding the words … ‘in a joint like this’.

They looked at me suspiciously, probably wondering which planet I’d just fallen from, before breaking into peels of laughter.

“Well, what’s it like here, is it ok?  I mean is it a good place to work umm, doing this?” I downed a second drink. My words weren’t coming out right. I didn’t want to patronise.

More peels of laughter – and another round. It seemed like it cost a lot of money for them to drink thin air.

Someone put an arm around me. Wooah. Hang on a minute. I stiffened. I’m not here, ….for that.

“Do you really want to know?” a soft voice asked me.  I didn’t know if I was ready for this, so down the gullet went another glass of vinegary, highly priced wine, more suited I think to stripping the stains of toilet bowls. Then I said I was ready.

We sat down. Five hungry pairs of eyes devoured me, questioning my integrity and doubting my sincerity, so I gave my best look of empathy, and hoped for the truth.

Mostly these girls had dreams of marrying a rich American (sorry, the rest of you) who would whisk them away to a never-never-land of perceived luxury with frequent visits back to the Philippines, and extended families well reimbursed with financial favours. Apparently, the girls aren’t just here for your stress relief fellas, they’re mostly here to get hitched. With their eyes on your  nether regions, they’re looking for the $ signs.

If necessary they would consider falling pregnant to expedite a satisfactory future, although sometimes getting pregnant back-fired, as one 30 year old mother told me. “When I said I was pregnant, he just took off, home overseas.  I took care of the baby and then came back to the job. But the guys look first at the teenagers without children. I’m really too old for this. What else can I do?”

Tales that made me want to weep

I looked over at my four friends. Were they hearing the same stories? By the look on their faces I doubted it very much.

Would they care if they did hear tales of sadness and sorrow? Maybe.

But they weren’t here for that.

And that made me feel even sadder. Girls as playthings, that’s what it came down to tonight.

“Didn’t you feel overwhelmed by the competition,” a male acquaintance asked me once I was back on my home stomping ground.  He looked at me as if I might need commiseration.  I should have told him “yes” I suppose, because isn’t that the common perception? The expatriate European female is not such a sought after species in these parts, and yes blokes here often allude to the amazing qualities of Asian women –  after all, The Philippines can be a foreign male’s aphrodisiac.

I was in danger of saying something rude and overtly feminist in my reply, but diplomacy ruled and I just laughed and made a joke of it.

“Nah,” I said. “It’s just made me think that there must be a planet out there somewhere where big boned women of European extraction are lusted and drooled over despite their inadequacies – and only if it’s for the money. A place where gorgeous, young, smiling men will dance to our tune and happily pick-up our smelly socks if we throw them on the floor. A place where if we get leglessly drunk and think we’re Einstein, or  believe we’re truly fantastic when we fart, we’ll still be lusted over. A place where even when we become old and crabby with wrinkled paper in place of skin we’ll still be pandered to and made to feel this life’s worthwhile after all.  Ahh yes, gorgeous compliant young men, just like the image you have of Asian womanhood.”

He looked at me, gave a half smile, drank up and left.

But I was only half joking, because if I eventually find this place girls, I’ll let you know, I promise!

What can we learn from ladies of the night?

As women, beauty is not our major capital, and never should be.

Having enough money to sustain us and a job that is interesting is a privilege, not a right.

Be grateful for all our small mercies and make the most of what we have. 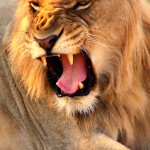 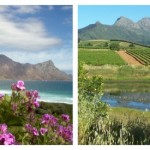 The Cape of Many Colours. 13 Amazing reasons to visit South Africa.