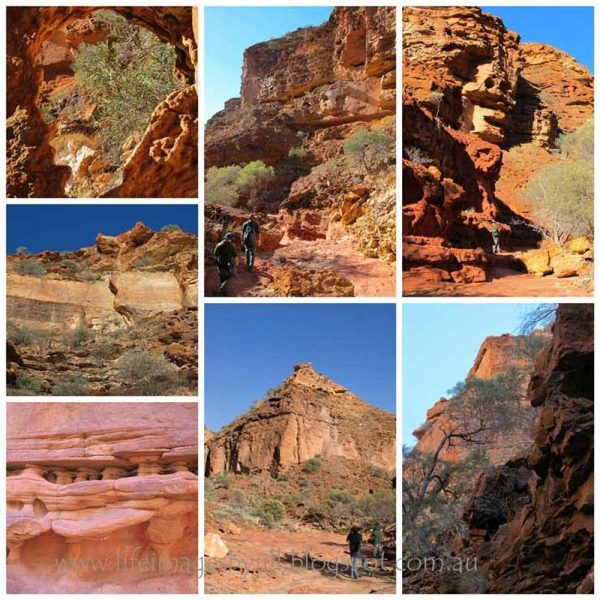 One thing that appealed to us immediately about the Kennedy Ranges campground is its perfect location within a stone’s throw of the Ranges – and trust me there were a lot of stones! Nestled on the eastern side of the ranges in the shadow of towering red rock ramparts soaring one hundred metres above the surrounding Lyons River valley plains.  Located in Western Australia’s southern Pilbara region, our first visit was in 2015 and with all the travel we had done across Western Australia, I wondered why we had never been to this amazing place before.

The Department of Parks and Wildlife (DEPAW) campsite and amenities may be basic – long drop toilet, no power or showers, and bring your own everything, including water – but this is more than compensated by the setting. 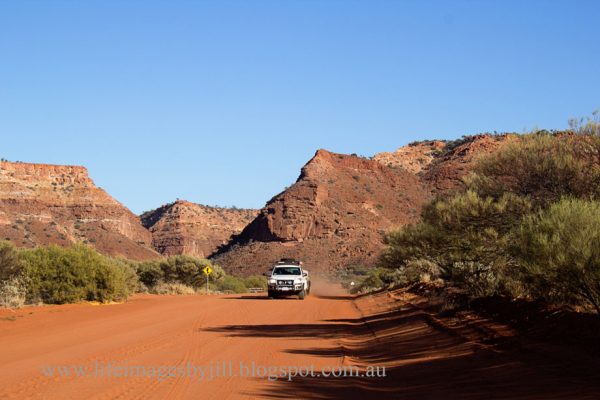 We arrived at the Kennedy Ranges around mid-afternoon. There are only a few camp sites with light shade, but we were lucky to secure a spot beneath a couple of scrubby trees with front row views of the Ranges.  On our first night we were treated to an amazing moon set between the cliff walls of Temple Gorge and in the morning the rising sun lighting up the rock faces brilliant red and orange. I wasn’t the only one up early to photograph the sunrise. 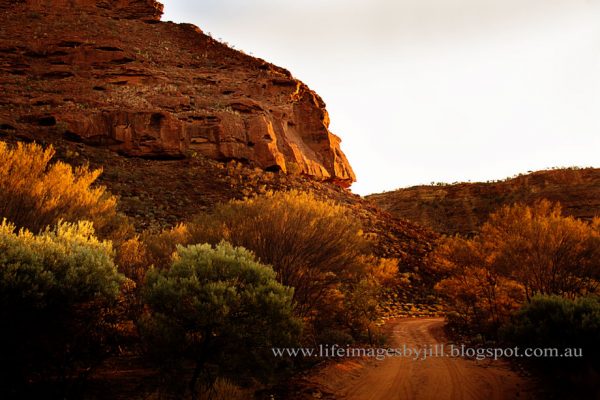 The Kennedy Ranges runs north south for 75 kilometres and is up to 25 kilometres wide. The southern and eastern sides have eroded over millennia to form spectacular cliffs, cut through by a maze of steep-sided canyons.  250 million years ago this was an ancient seabed and you may see fossils in the rocks.

The Ranges are surrounded by dry red sand country dominated by spinifex, however 400 plant species have been recorded in the Park including 80 species of annual wildflowers which flourish in August and September after good rains. There are 20 recorded mammal species including euros and nine bat species, 100 bird species and 33 reptile species. 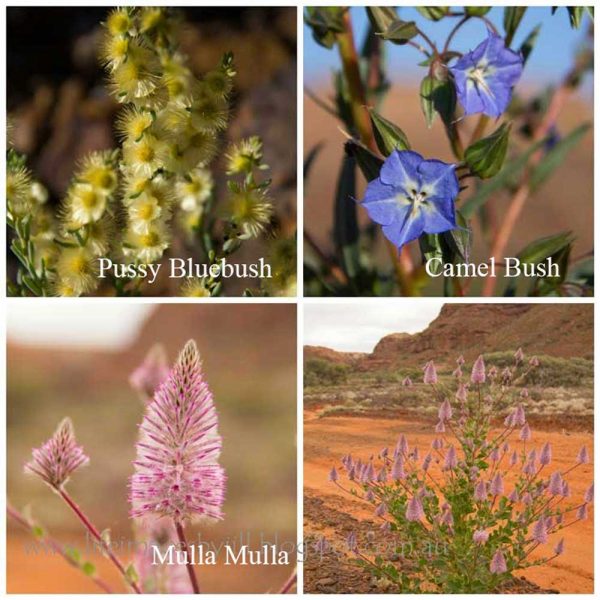 There are several walk trails to explore so I recommend you stay a few days. Check the information boards at the start of the walk trails, before you set out. Most of the trails are unmodified with only basic trail markers. Some follow creek lines and are quite rocky requiring a fair amount of clambering so walkers need to be aware of the walks’ degree of difficulty, their own capabilities and the approximate time to allow.

Our friend Karyn felt that “the Kennedy Ranges have an energy about them”.  You can see this along the walk trails by enormous rock slips, giant rock slabs and black lava-like rocks that appear to have been spewn up from the earth and then thrown down shattering into pieces.

The main Temple Gorge walk trail (2km return, allow 2 hours) starts from the camp ground. The first part is along a dry creek bed leading to the towering rock face known as The Temple. From here there is a short walk to the left or follow the boulder strewn right hand fork finishing at a small seasonal rock pool. Please do not drink the water. 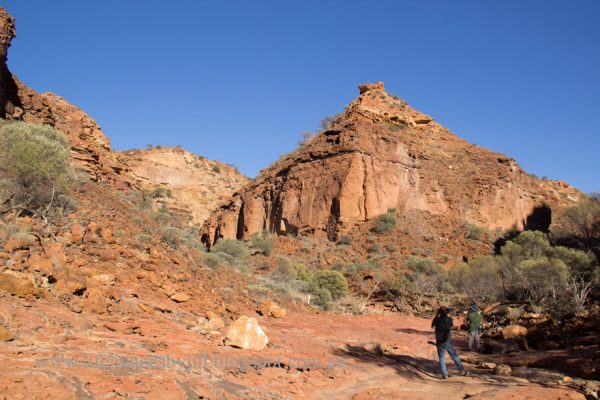 You can also walk to Honeycomb Gorge from the camp ground (approx 3km each way) or take a short drive to the start of this 600 metre relatively easy trail. 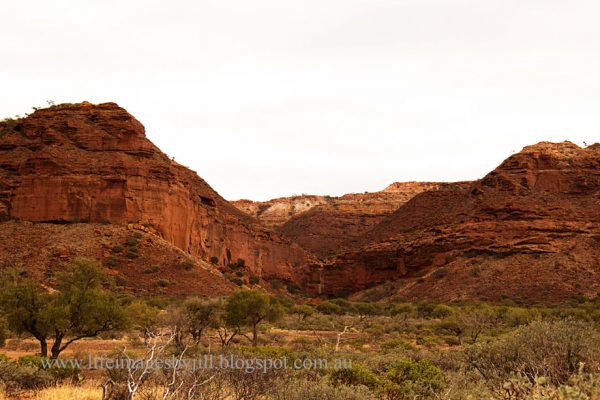 The gorge features intriguing honeycomb like cavities eroded into the rock face by wind and water spray from a seasonal waterfall above the cliff face. We were fascinated by these honeycomb creations which look like they have been hand carved into the surface of the rock. 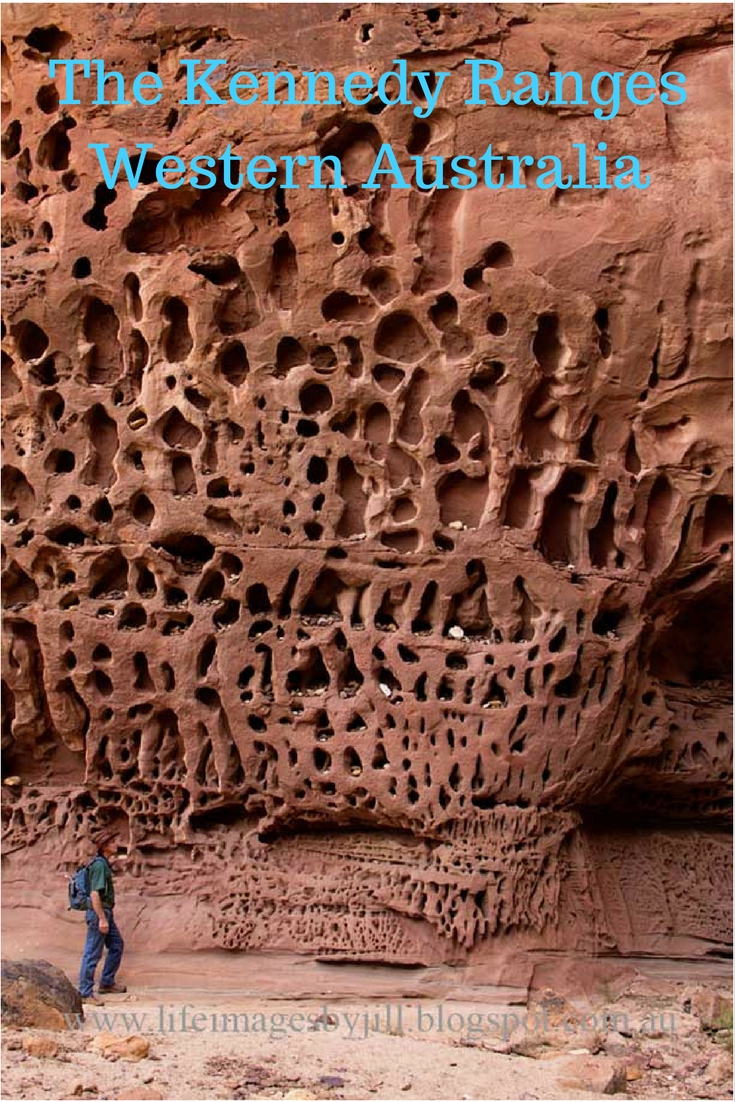 The other two walks are the Drapers Gorge Trail (Class 4 – 2km return, 2 hours) and the Escarpment Trail (Class 4 – 3.4km return, 3 hours). I recommend these only for the physically fit and experienced as the trails are steep, with loose and crumbly rocks, boulders to clamber over, and narrow cliff edge paths.  However those who do attempt these walks are rewarded with spectacular views.

We only attempted part of the Escarpment Trail to a point where we could appreciate the view. Considering the roughness of the trail it was enough for us and a reminder to always be aware of your own abilities. 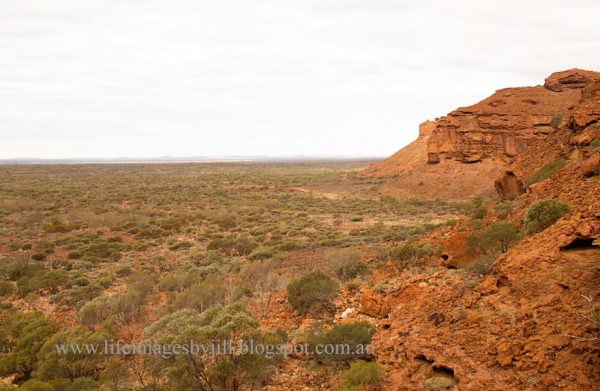 The area is steeped in ancient mythology and is the traditional lands of three Aboriginal tribal groups: the Maia to the west, the Malgaru to the east, and the Ingarrda to the south. The Ingarrda called the range Mandatharra. The fresh water pools after rain were an important water source. Aboriginal sites are protected and should be respected.

European history goes back to 1858 when Frances Gregory explored the area, naming the ranges after the then WA Governor, Arthur Kennedy. Within 20 years pastoral leases were taken up, but hampered by lack of water. The 141,660 hectare Kennedy Range National Park was gazetted in 1993.

The Kennedy Ranges are just one of the highlights along The Wool Wagon Pathway, one of Western Australia’s Outback Pathways. 1,293 kilometres long, it can be driven in either direction, starting at Geraldton in the south or Exmouth in the north. The road is mostly good graded gravel but parts are only suitable for 4WD vehicles, especially after rain. I recommend you allow at least a week or longer to fully enjoy all the pathway has to offer.

There are plenty of camping options and the interpretive sites where you can read stories of the graziers, blade shearers, horsemen, drovers, fencers and well sinkers who were the pioneers of this country which supplied quality wool to London.

Where is it?:  72kms north of Gascoyne Junction, via Ullawarra Road.  The Wool Wagon Pathway commences at Geraldton, 433 km from Perth, or Exmouth, 1270kms from Perth. 4WD recommended.

Parts of the Wool Wagon Pathway are only suitable for four wheel drive vehicles. Supplies and services are limited and road conditions can vary, so plan ahead, stock up on food, water and fuel and contact local visitor centres for up-to-date track information.

Time to visit: Late autumn to early spring. Avoid summer months as temperatures can reach over 40 degrees.  Allow two to three days to explore the Kennedy Ranges, plus travel time each way.

Facilities: About 30 campsites, some with light shade. Long drop toilets. No power, showers, or water. You need to be totally self-sufficient, including water. Please take away all rubbish with you. No disabled facilities. Pets not permitted as this is a National Park.

Walk Trails: Take note of the maps and signage. Be aware of your own physical ability. Avoid walking in the hottest part of the day, don’t walk alone, carry plenty of water and food, and wear a hat and good walking boots.

WA Department of Parks and Wildlife including a downloadable map

Bio. Jill Harrison is a travel writer, award winning photographer and blogger at Life Images by Jill  where she writes about Western Australia, and showcases her amazing photographs. You can often catch Jill writing for On The Road magazine too. All photos in this post were taken by Jill. 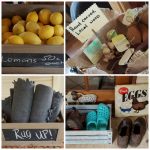 Road Trip from Bunbury to Nannup, Balingup, Donnybrook and Capel. 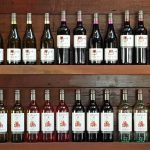