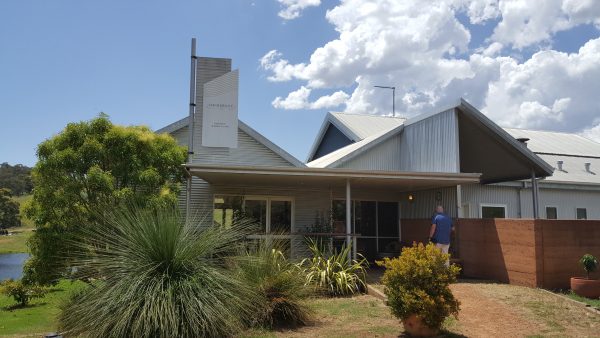 Hackersley Restaurant is situated in the Ferguson Valley approximately twenty minutes inland from Bunbury in the South West of Western Australia. It’s about 2 hours (driving time) from Perth and is located just off Ferguson Road about 11kms from Dardanup.

It’s in a pocket of the beautiful Ferguson Valley which can best be described as charmingly sylvan. 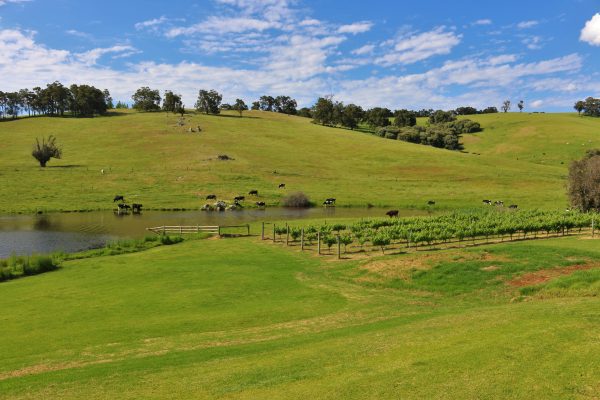 You approach along a short gravel driveway which winds through rolling countryside, and the scene that opens up to you, with vineyard, a beautiful dam and cows grazing in fields, is like something out of an Old Masters oil painting.

It was this little pocket of paradise in the Ferguson Valley (which for over 100 years had been a dairy farm) that Jeff and Kerry Ovens (along with ex partners the Stacey and Hewitt families) identified as the site for their dream of a vineyard and winery in 1997.

Rounding up friends from the city the initial planting of 15,000 routings (8Ha) was completed in 1998. Jeff and Kerry are the sole owners of the vineyard and the restaurant which is run by Aaron and Andrie Devitt. 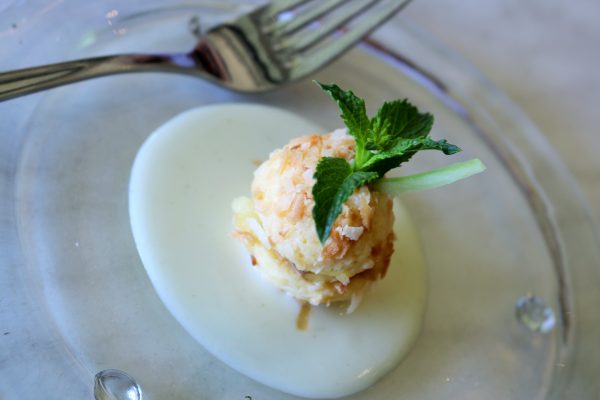 To dine with a view which is as lovely as it is peaceful is a rare treat in today’s rushed and harried world. The Ferguson Valley can be as emerald green as Ireland in winter and can turn to golden brown in summer. 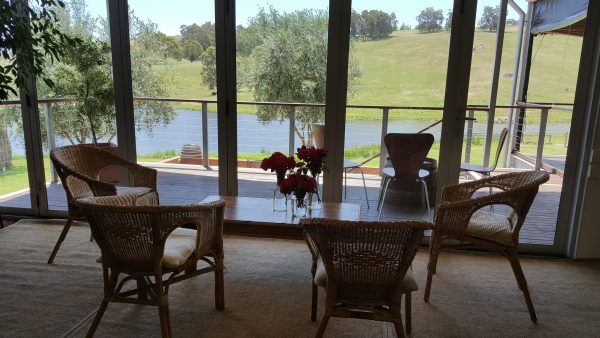 If you are looking for places to eat in the Ferguson Valley, then don’t go past this jewel.

The menu at Hackersley is degustation and there are five sumptuous courses. To eat Aaron’s inspired and innovative creations is to be blissed-out in a gastronomic way. 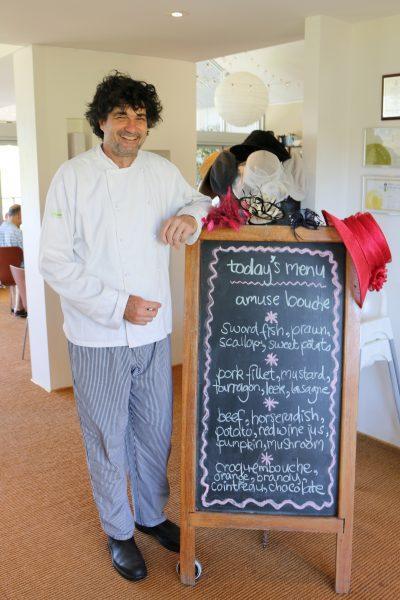 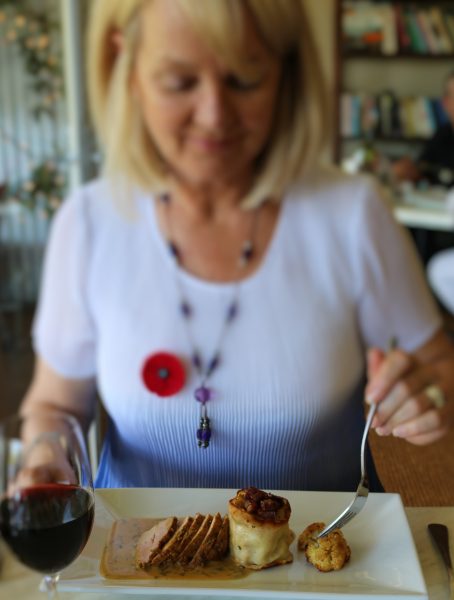 To be welcomed by smiling Adrie and her friendly tasting room staff immediately sets the mood for a relaxed and interesting dining experience.

You might, as we did, taste the Hackersley stable of wines and decide which you will have with lunch, and single out a bottle or two to buy to take home afterwards. 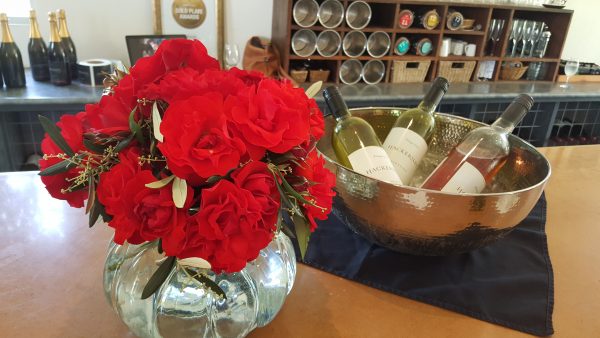 The tables at Hackersley nearly all have a view of the surrounding Ferguson Valley countryside. Floor length windows with big sliding doors lead to an expansive deck, where when the weather is mild you can dine al fresco. 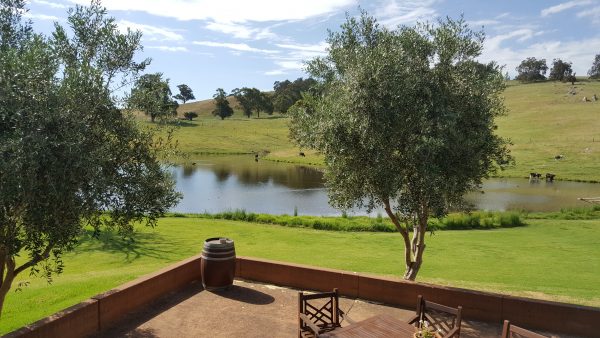 City souls especially will lap up the countryside’s sights and sounds, gaze at the view and maybe watch the dairy cows cooling their hooves in the dam. 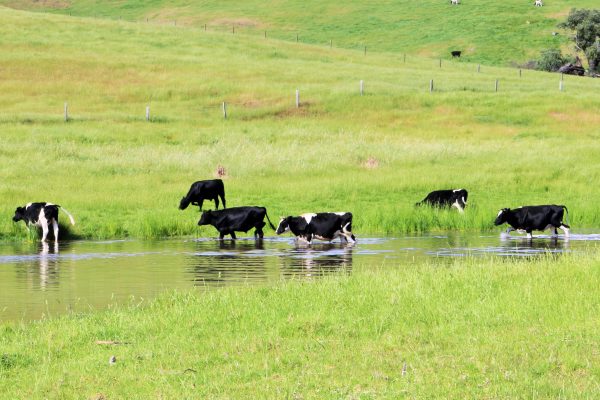 Dining at Hackersley feels casual and friendly, a little like being in someone’s farmhouse having lunch with them at home, although the degustation menu is not your average farmhouse fare. Overall the restaurant’s ambience is about as far as you can get from a corporate feel. 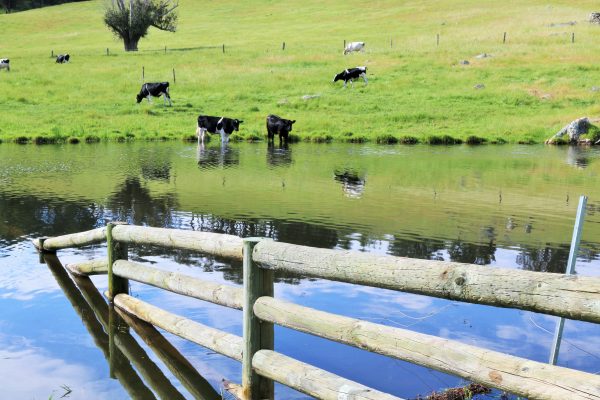 For instance one wall comprises of a huge bookshelf which invites you to linger longer, stay for a while, grab a book and read on the deck while letting your food go down perhaps? 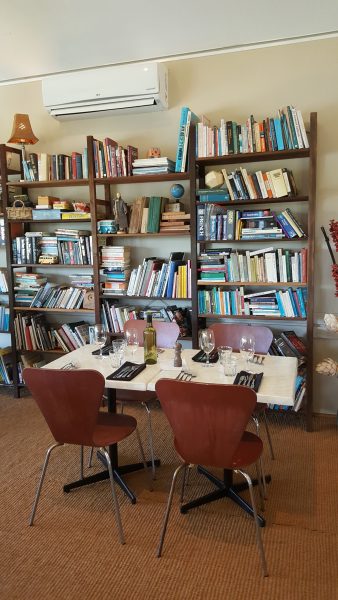 On the dining front the menu is varied and interesting and chef Aaron changes the menu to suit the seasons, approximately every 7 weeks. 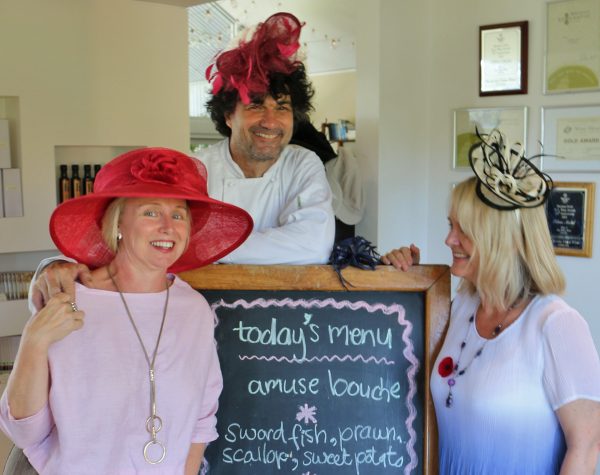 “What is an ‘Amuse bouche?” I asked Aaron.

I later read that it’s  served to prepare the guest for the meal and to offer a glimpse into the chef’s approach to the art of cuisine. 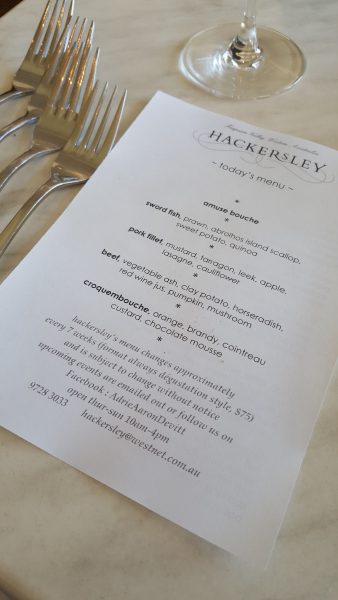 Aaron’s first course was nothing if not a mouth amuser. A bacon and pineapple custard with a tiny parcel of pineapple and rum jelly in the middle. Toasted coconut on the outside, a bacon and pepper sauce, topped with a mint leaf and a tiny piece of celery. All in all, delicious. 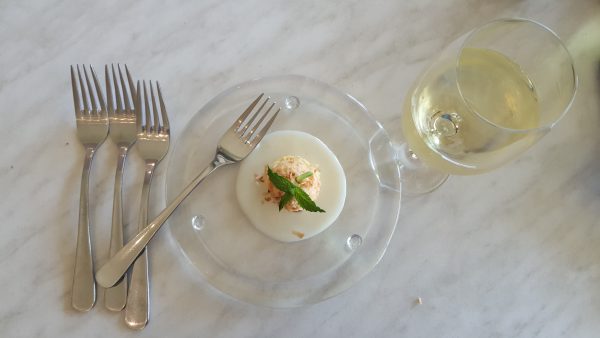 Hackersley is a great place to come with family and friends because the lunch will be long, and the food is most likely to be a conversation point. We arrived at 1pm and left at 4.30pm.

Throughout the meal there were novel gastronomic touches. The beef (in vegetable ash with a delicious red wine jus) was served with potatoes which on first glimpse I though were hot river rocks perhaps designed to keep the plates warm. I know, ‘Should have  gone to Specsavers!’ On second investigation these were delicious clay baked potatoes with a surprise filling – one had a pumpkin filling and the other mustard. 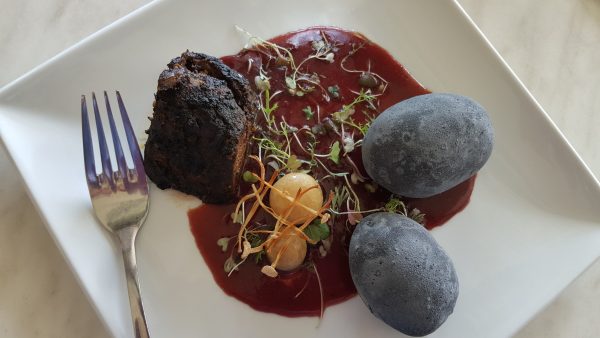 We had lunch just a couple of days after Hackersley’s lunch for the race that stops a Nation. The Melbourne Cup.

The race didn’t stop Max Kerr that day though as he won the Hackersley Cup in the quirky contest which has become a tradition at the restaurant.

For this is the day that local farmers take to the paddock below the winery and contest their own version of the iconic race, not on multi-million dollar thoroughbreds but on children’s hobby horses. The winner’s name gets engraved with a marker pen on the Hackerlsey Cup. 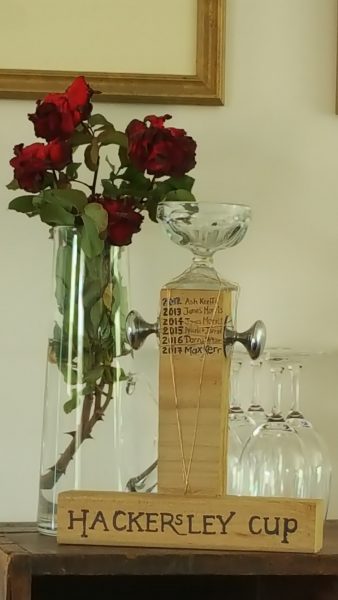 We were told that this year saw popular local contender Max Kerr win the race. Rumour has it though that the 5 course meal with alcoholic accoutrements was a handicap just too hard for another, younger, favourite to overcome 😉

Other gastronomic delights, highlights and surprises of the meal were a delicate lattice of shiitake mushrooms, beef cooked in vegetable ash, clay potatoes, moist and delicious sword fish, clams to die for, pork fillet in a mustard and tarragon sauce, and the croquembouche dessert which has to be eaten to be believed. 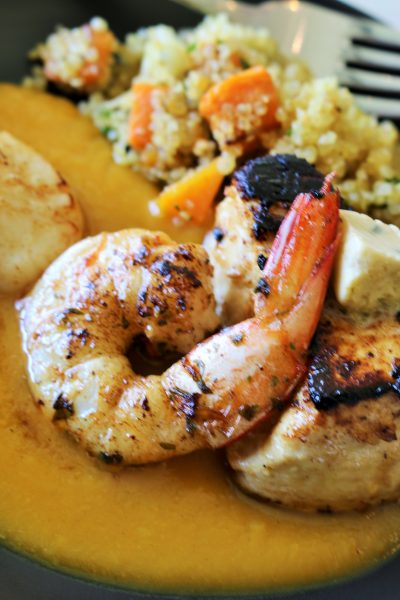 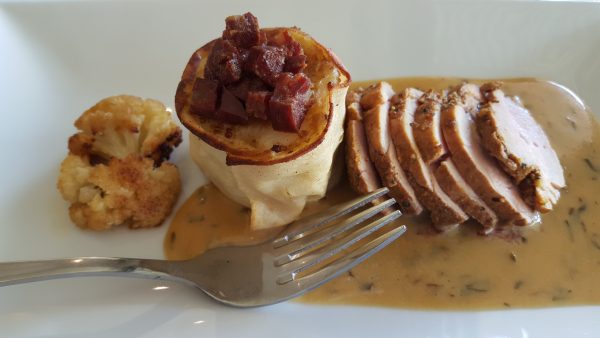 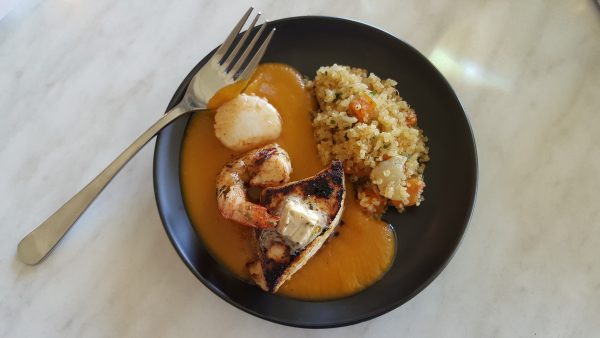 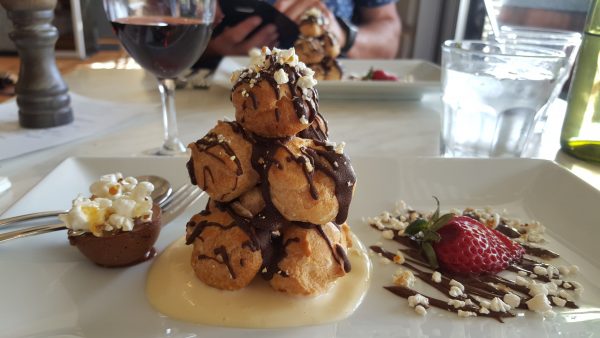 We’ve been coming to Hackersley with friends and family since 2014 and have never been bored with the menu or disappointed with the food. Today’s meal was complimentary, but all views are my own. I have written about Hackersley on previous occasions – one from the past you can find HERE.

Aaron and Adrie oversee a small team who are all dedicated to their jobs, most of whom have been with them for many years. We can safely say the service was superb.

When to visit Hackersley Restaurant

The restaurant and tasting room is open for business Thursday – Sunday from 10am to 4pm. Look out for the Sunday Lunchtime Jazz sessions.

For more information about what’s on in The Ferguson Valley, click Here. 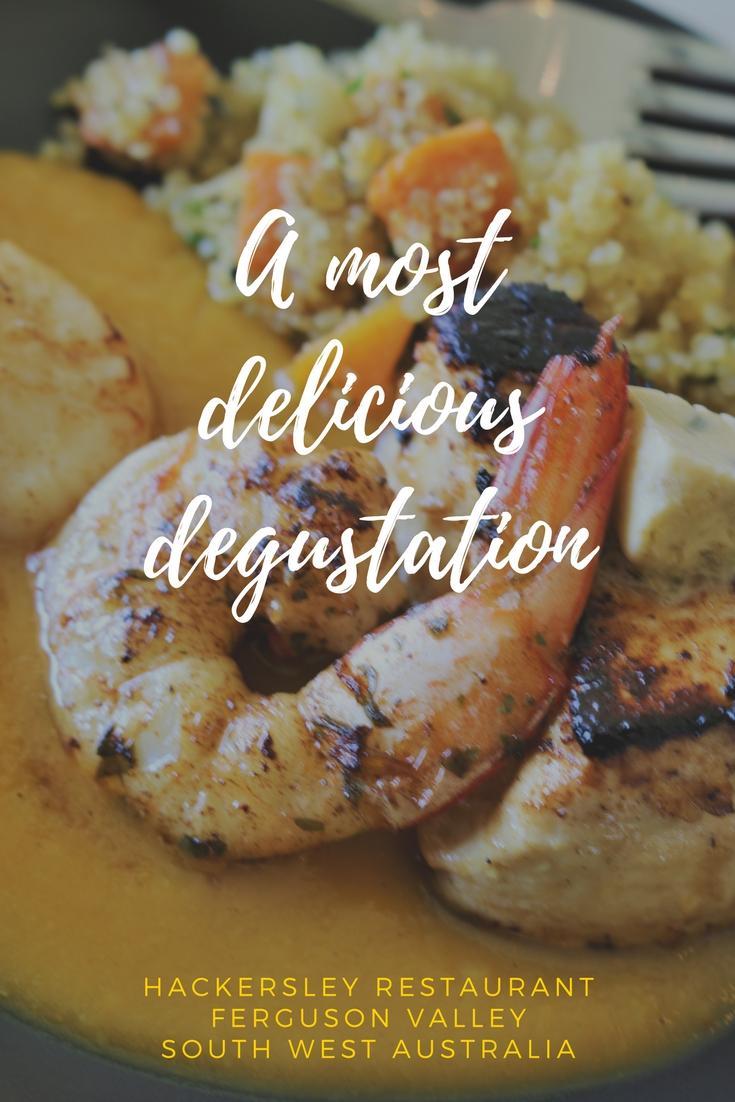 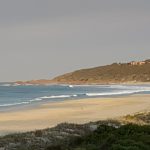 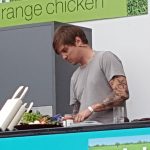