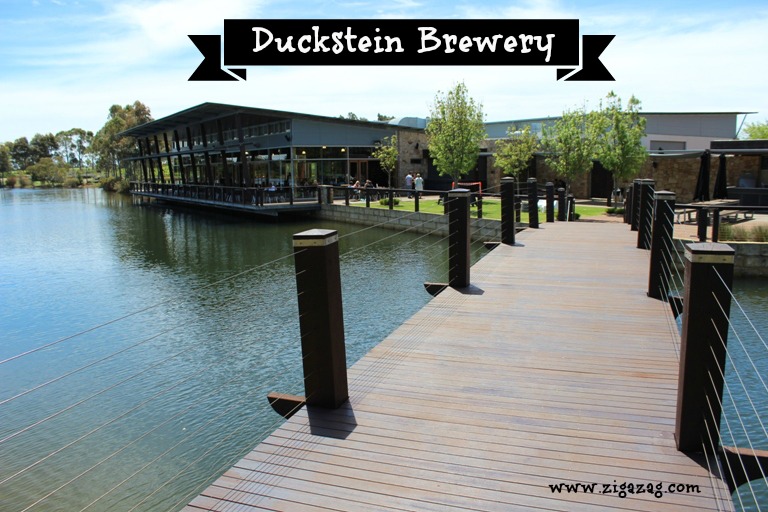 You’d be mistaken if you think that Margaret River is all about wine. Of course it is in one sense but there’s a growing boutique beer brewing industry that is not only close-knit but also creative, and very popular.

Breweries in the Margaret River Region

Each brewery is different, not only in setting  but also in the beers they produce which might range from pale ales and pilsners to preservative and additive free brews.

You’ll find breweries a little more casual than the wineries, and they are the sort of places where you feel it’s ok to come off the beach for a beer and lunch dressed in a pair of shorts, with sand still between your toes. I’m not saying you couldn’t still do that at the wineries, but you probably wouldn’t want to.

However, Smith’s Beach is a gorgeous sandy beach close to Duckstein and it seemed a shame not to go for a quick walk to watch the surfers on the big breaks out at sea. 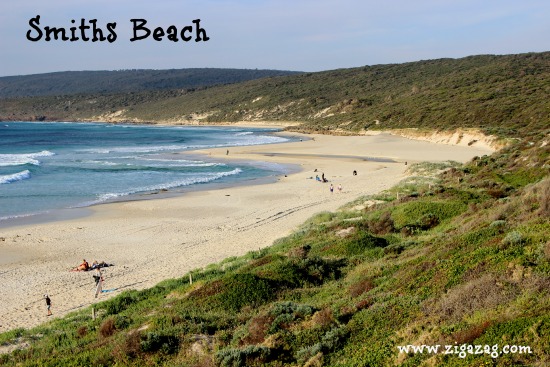 But I digress. Let’s start at the beginning …

Peppermint trees are in bloom and there’s a white hue to their olive green leaves as we head off south along the Bussell Highway for a belated anniversary celebration, on a quest to discover more places to wine, dine and recline in the beautiful Margaret River region.

After a quick stop at the beautiful Palmer Wines cellar door where we buy a bottle of bubbles, we have a quick look around the grounds. Palmer Wines was established in 1977 as one of the pioneer vineyards in the Margaret River region and here you’ll find a pretty dam, and a barn-like cellar door with an adjacent restaurant that’s set in a courtyard straight out of a scene from Tuscany. 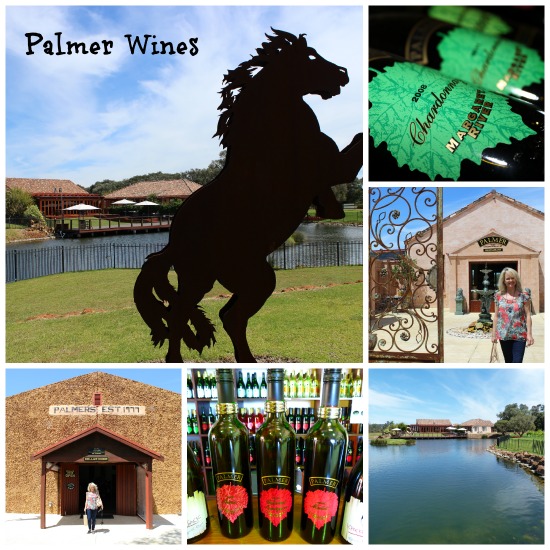 Then we mosey on to Caves Road to our first Brewery for lunch.

If you look at Duckstein Brewery as you’re driving along Caves Road you’ll see a modern building and a dam. “Oh, nice”, you might think, but I have to admit in the past I’ve thought, not exceptional and haven’t been tempted to actually go in.

Which is a shame, because Duckstein is exceptional from the flower filled entrance and the Saracen statues to the winding drive that meanders up a slight incline and which is in season lavender lined and absolutely gorgeous to look at.

From the car park you’ll walk past more statues and water features, lily ponds and landscaped gardens until you reach a huge and very impressive door that leads into a large open double aspect area of baronial proportions, which on one side looks over the lake where there’s a verandah with seating jutting out over the water. 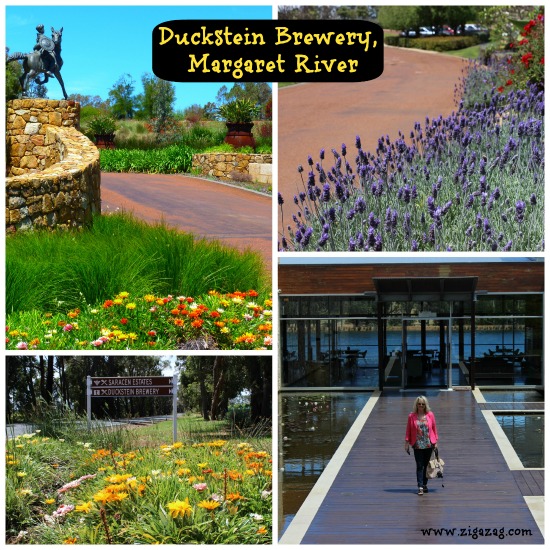 There’s a huge stone feature fireplace with a stainless steel surround, and we vow to come back in winter and bags a place on the couch by a wood fire to sip beer and read the Sunday papers, or perhaps we’ll taste wine because as of July 2013 a wine bar has been introduced which features 10 different producers from the Margaret River region.

This means that if you’re not so much of a beer fan you can sip wine and have a cellar door experience before either buying a bottle to have in the restaurant or purchasing some to take home. 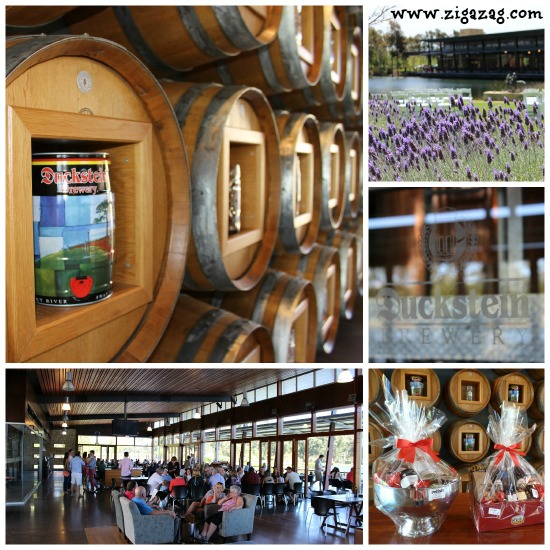 But really, I have to admit, it’s all about the beers.

“We offer German style beers which include 4 house beers – A Pilsner, Hefeweiss, Altbier, and a Dunkel. We also produce a seasonal ‘Fest’ Beer and a seasonal Single Vat beer, and we offer a local Margaret River cider as well,” Sam Vinton-Boot the General Manager tells me while keeping one eye on a very busy restaurant.

I look across to the huge panes of glass behind which, and on display within the restaurant itself, is an operational 1000L brewery. It’s impressive and feels a little industrial, giving the restaurant space a feeling of added purpose. 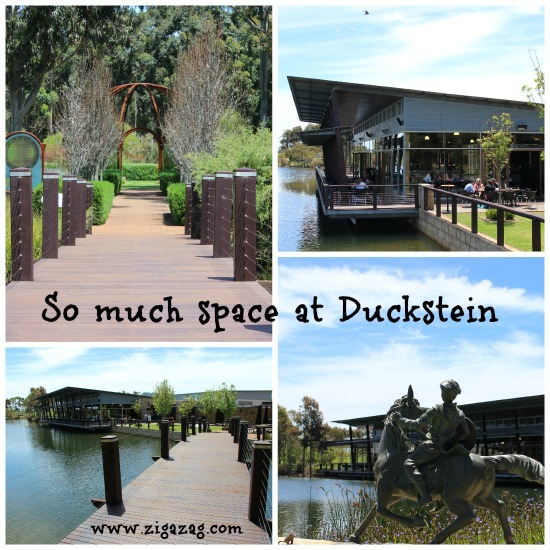 “We make our beers using the German principles, using a range of imported malt and hops from Europe, and Australia to make the beer as authentic as possible. We use rainwater and that’s why they taste so good. There are no preservatives or additives,” Sam explains.

The restaurant has a 500 seating capacity and booking in advance is recommended at weekends, although a certain number of tables are held back for walk-ins.

Wedding ceremonies and wedding receptions are catered for, often on the idyllic island in the middle of the lake which is connected to the main property via a bridge. For the bride and groom you have to think that there are great photo opportunities everywhere you look at Duckstein.

There’s live music at the weekends in summertime.

There’s a designated playground for children, and lots of space for them to run around.

Menus change with the seasons and produce is sourced locally. Portions are generous. If you’re hungry have the Schweinshax’n pork knuckle – it’s humungous! The menu offers a range of Australian standards such as Fish and Chips (with flaky pilsner batter) or Char Grilled Black Angus Sirloin with sweet paprika chunky wedges, heirloom tomato and gorgonzola salad, and German classics such as the Brewers Pan with bratwurst, smoked kassler, chop, potatoes and sauerkraut. 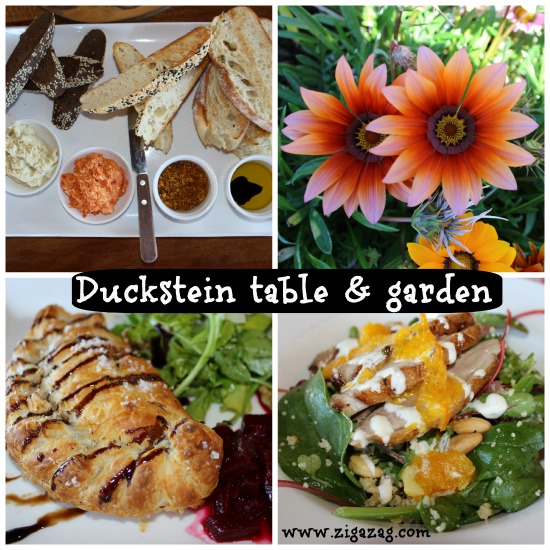 We had the bread and dips followed by a Duck Salad; crispy skinned breast on cous cous salad with honey glaze pumpkin, Swiss chard, Danish feta and roasted cashews. And the Wild Mushroom Strudel with goats cheese and spinach, rocket. walnut salad and beetroot chutney.

I’m not generally a beer drinker but having sampled Duckstein’s tasting tray I’m converted. Watch out hips, times they are a changing because I’m particularly fond of the Hefeweiss, unfiltered wheat beer with hints of banana, clove and vanilla. 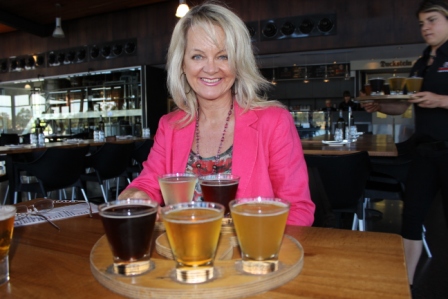 You can find it at 3517 Caves Road, Wilyabrup, about halfway between Margaret River and Yallingup. Disclaimer: My lunch and tasting were complimentary.

Want to know more about beer? Here’s an interesting article from the Huffington Post : 29 Things you should know about beer

Part 2 of the Beaches and Breweries series, will feature a gorgeous overnight retreat, the best beach to visit for a sunset and top places to eat around Dunsborough. Part 3 will feature a fabulous micro brewery, a gourmet lunch and some of the best beaches in the region.  If you’re lucky there will also be a Part 4 – watch this space.

Where in the world is your favourite brewery? 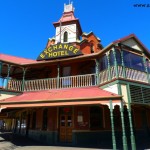 Kalgoorlie The Gold Capital of Australia 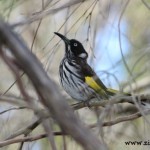