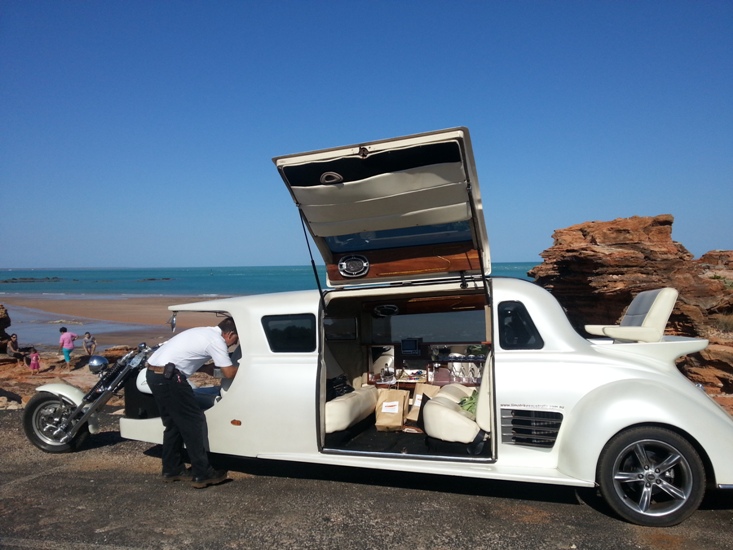 Today ZigaZagers we’re going on a magical mystery tour to Broome, way up in the north west of Western Australia.

I’m going to take you with me on a unique motorised ‘trike-limo’ to view a staircase to the moon, and then (Yay!) we’re off for a cooling beer at the  most remote brewery in WA.

So please … buckle up, and step with me … on a magical mystery tour way behind the looking glass in Wonderland.

Them Pearls from Broome, Western Australia 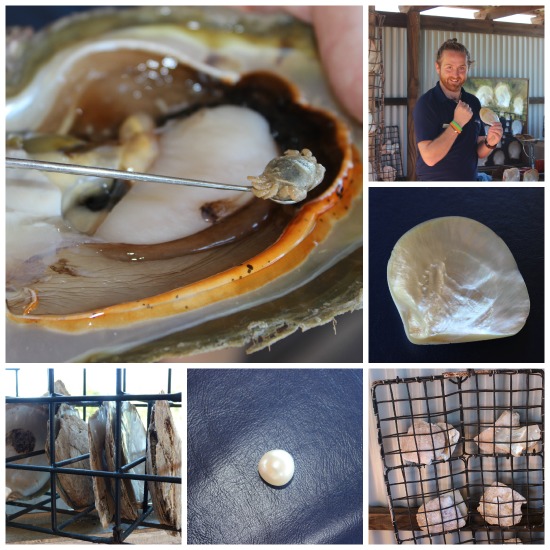 Some of you will have already read about Willie Creek Pearl Farm (8 Weird and Wonderful Things about Pearls) and the reason why every girl really needs a pearl, so now it’s time to head away from the creek along the red gravel road so corrugated in places it could shake your fillings out head back to the little outback town of Broome.

Time for a cooling beer or a cocktail, don’t you think? 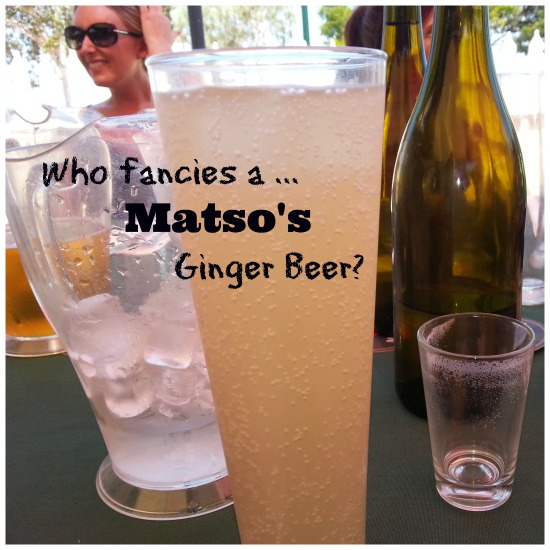 Matso’s Brewery is touted as the most remote brewery in the world and I’m not going to dispute that.

It’s situated close to the beach and sports a lovely verandah with shady wind sails to keep you protected from the blistering sun as you sip beer or dine in al fresco splendour at the restaurant.

The building itself has an interesting history. In 1910 it was originally constructed as the Union Bank and since then it’s been moved three times. In 1986 it was moved to its present position, trading as Matso’s Store, then in 2000 the idea came about to produce good quality craft beer on the premises.

I really enjoyed the Mango Beer and the Ginger Cooler, but the Chango was something different (Mango and Chilli). It had one enormous kick, like a mule, and certainly gave me an appetite.

And so it came to pass that at Matso’s we met Sunrise TV presenter, James Tobin who was doing a story about Broome, and yes I had to have my picture taken with him – ahem, well wouldn’t you too? 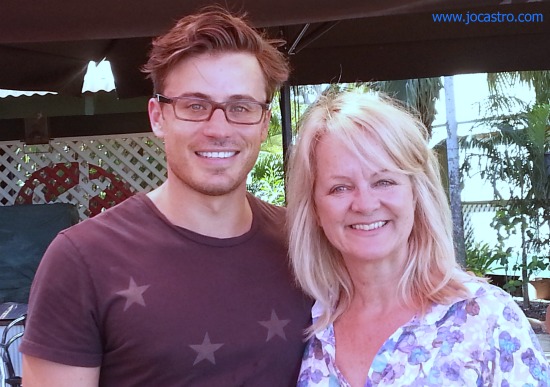 We also met Rich Keam who arguably had the best job in the world at the time. He won the chance to taste his way around WA for six months  and we met him on his 21st day of munching and tasting as WA’s Taste Master. He admitted to having put on a bit of weight, but lucky Rich is long and lean, so hopefully he didn’t end up waddling back to Portsmouth in England at the end of it all.

Secretly I wonder if he ever went home.

We chatted about England and Devon where I come from, and he promised to visit us in Bunbury too, but the talk soon turned back to Broome’s attractions and it’s famous camels on THAT famous stretch of beach : The Camels of Cable Beach

As we leave Matso’s Brewery an odd looking trike turns up.

Well, it’s a bit of all three!

It’s apparently the only trike limousine in the world and it was built in 2000 – on the back of a Harley Davidson, and we all shriek with joy when we get closer. The hatch door opens up to four seats in faux leather, surrounded by real wood fittings, a perfect wooden mini bar complete with lollies, strip lighting for night-time revellers, music, and two open air seats high on the back – what a view! 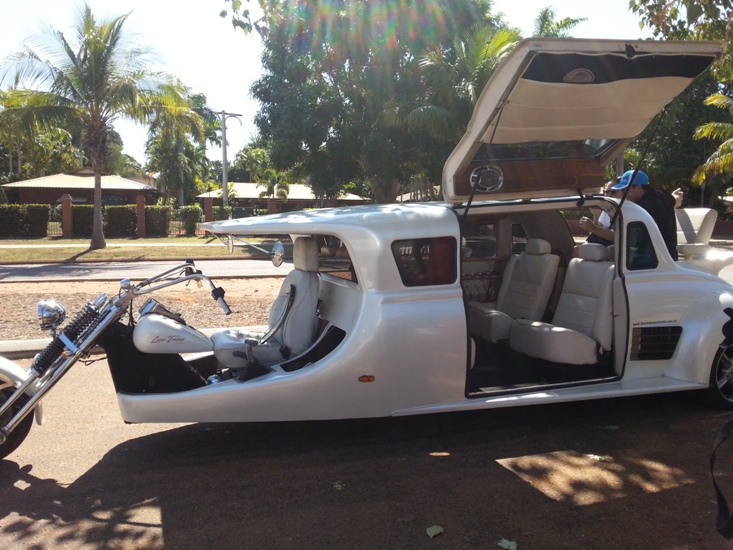 So come with me please as Roger, the owner of Broome Trike Tours drives us around the town pointing out places of interest. First we’re taken past Sun Pictures the oldest open air picture garden in the world, and then on around Chinatown before Roger hands out his handmade lollies that contain crickets, mealie bugs and witchety grubs.

We look at them in disbelief, only seconds before fellow Broome traveller, Mr Jasper, unwraps a lolly and beams a little wickedly as the girls squirm.  It takes him about an hour to reach the grub, which he declares is ‘nutty’ tasting. 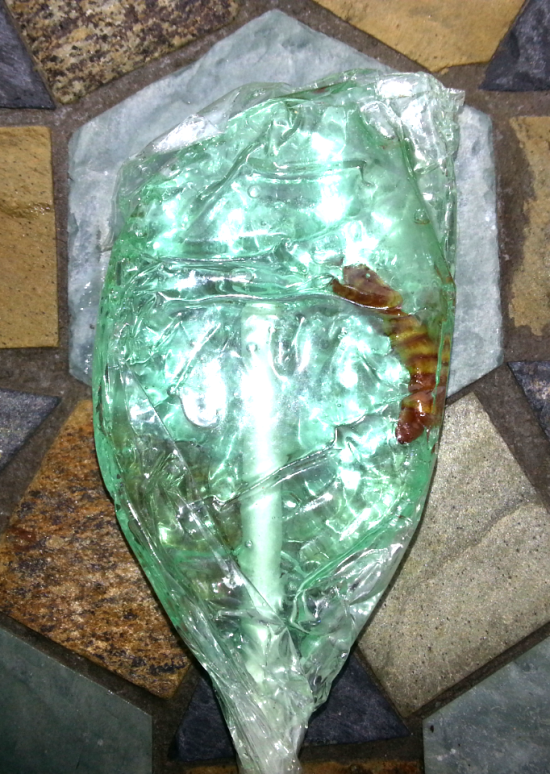 “Can we eat it?” asks Mr Jasper as he puts it in him mouth at the exact moment that Roger says “Yes.” 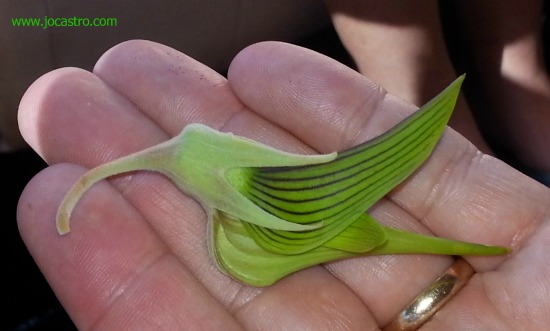 It’s such a pretty little thing, that although I watch Mr Jasper munching with some intrigue, I can’t quite come to eat mine.

I was so taken with this little flower that I failed to pay attention to the chat about it.

So later I Google’d ‘bird flower’ and it’s name comes up as, “Euphorbia bracteata, an Indonesian flowering plant with pretty blooms in the shape of dainty sparrows.”

We stop several times, and Roger brings out tasters of his home brewed exotic bush liqueurs from Kimberley Bushtucker Liqueurs  and instructs us in various bush tucker food items, such as the Gabinge which is a local fruit containing the richest form of vitamin C known to man. One fruit the size of an olive is equal to about 50 oranges. We try one, it’s not very nice, but hey, it’s medicinal!

At Minya Park, Roger encourages us to try the fruit from the Bloodwood Tree. “Aborigines eat this fruit for morning sickness, it tastes a little like an apple,” he tells us.

During the trike tour we pass various places of historical interest from the Port, to the Town Monuments, Streeters Jetty, the big Boab tree and Anastasia’s Pool at Gantheaume Point. Anastasia’s Pool was created amongst the rocks by the former lighthouse keeper for his wife Anastasia who suffered from arthritis and believed the salt water which filled the pool at high tide had possible healing properties.

We finish the tour with a very rock star ride along the long stretch of white sand on Cable Beach. 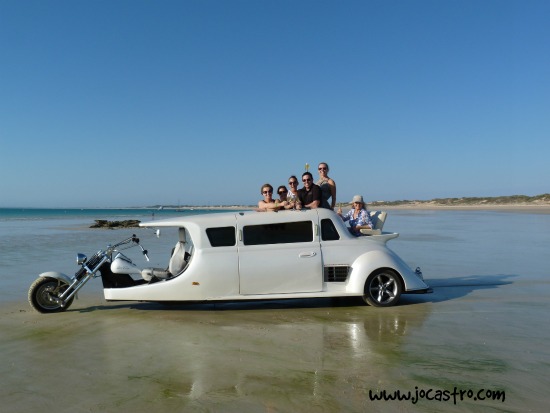 Heads turn, people point and smile. We wave and brandish flutes of bubbles as the warm breeze blows through our hair and we stand up and take in the view feeling just a little bit like celebrities. 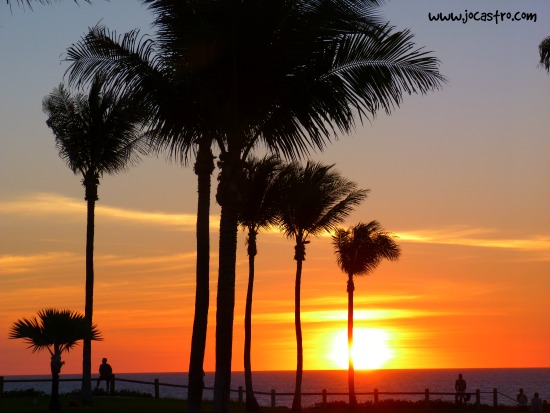 A staircase, the moon and a dark starry night

The day ends with a natural phenomenon that softens the hearts of even the most hardened cynics. 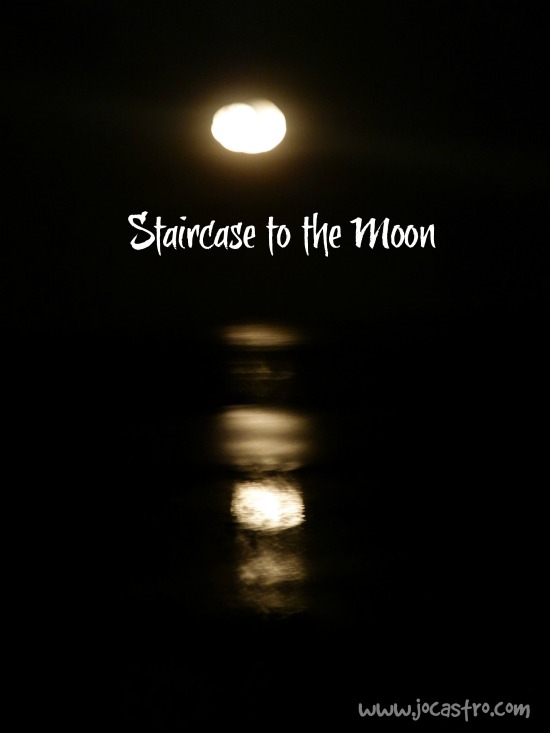 At The Mangrove Hotel I know a didgeridoo will be heralding the rise of the moon, as tourists skulling Matsos Beers and chilled wine will be shaking themselves free of city trappings and entering the natural world where the phenomenon Staircase to the Moon will quieten their banter with the wonder of it all.

Tonight thought we are with a crowd of people, standing on a ridge at another watch-point at Town Beach, gazing out into the blackness of the night, not yet under the light of the silvery moon.

Mr Jasper finds an App on his iPhone which tells us exactly where we should be, and how many minutes until the moon rises, and it’s dead right. We find our spot, too late to get front row seats, which turns out to be a bad move because the front row refuse to sit down so photography is difficult. Anyway, none of us had brought along tripods which, take note, are absolutely essential if you want to have any success in getting a good shot.

I feel a tingling anticipation as the first slit of the moon appears over the horizon, a tiny white streak against a sea of black. Ahh, the wonder of nature in a living breathing landscape where there’s not a high rise building in sight. Bliss.

Stillness. There’s a hush as we all stare in awe at the harvest moon, which is a deep blood red, slowly rising into the inky sky as if pulled by an invisible string. The silence is almost mythical and in my mind I can hear that didgeridoo at The Mangrove Hotel, as Aborigines celebrate their culture too.

Then quiet. Until one of our group breaks into song and under our breaths for no explicable reason we’re suddenly humming “Da doo do Da” by Sting and the Police.

It’s as if we’re celebrating the weird and the wonderful and the incongruous of this magical place far far beyond and behind the looking glass in Wonderland.

Disclaimer: My trip to Broome was courtesy of Qantas and The Mantra Frangipani. 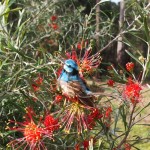 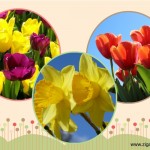 Why you should visit Nannup, Western Australia