Have you ever met a monster from a Swamp?

Scratch that, have you ever met TWO Swamp Things?

I have, and it wasn’t between the pages of a Stephen King novel, but at the annual Bridgetown Blues Festival last weekend.

And oh gosh,  were they captivating!

The energy, the fun, the exuberance, the downright cheekiness! The way they compelled you to keep your eyes on them as if some gremlin magic was at work from a scene out of Lord of The Rings … My Precious.

Which is fitting in a way, because Lord of the Rings was filmed in New Zealand and the duo who make up the blues and roots band, Swamp Thing, hail from Rotorua in New Zealand.  Michael Barker (drums/percussion/vocals) and Tauranga singer-songwriter-guitar-great, Grant Haua,  have got a good thing going for sure, and for the brag sheet … well, Michael’s recorded and toured with prominent contemporary artists such as – The John Butler Trio, Kiwi legends Split Enz,  The New Zealand Symphony Orchestra, and Missy Higgins just to name a few.

We saw them first quite early on in the day at the Blue Owls Nest, and then addicted to their music we made sure we caught them later in the evening at the Festival Club. Their show was electric; Grant’s guitarlicks spellbinding, his vocals raw, unshaved. Both events were foot stompingly, head noddingly and crazy-move-dancingly wild – and boy did they get people up on their feet – even when the ever cheeky Michael turned from his signature hard core drumming to some soft tinkling on the glockenspiel!

The Blues Festival is held each year at the beginning of November in Bridgetown which is situated in the picturesque Blackwood River region of South West Australia.

Saturday at the festival was wet. Very wet. But the vibrancy of the event couldn’t be dampened by the downpours, and it didn’t deter people who huddled under brolleys and in plastic festival ponchos trying to stay dry at venues such as the open air Geegelup in the main street of Bridgetown where we watched Ali Penney.

The pub venues were popular during the heavier downpours and we saw the oh-so-easy-to- listen to Mitch Becker Band at Scotts Tavern and the  foot tappingly good Rick Steele Band at the old Bridgetown Hotel, where later on we also listened to Home Brew.

Festival Club was a warm and dry place to watch Paul Ubana Jones who received a standing ovation, and later on newcomer Joe Robinson played there – a little like Ed Sheeran to listen to I thought. The large tented Blue Owls nest hosted seasoned American trouper Charlie Musselwhite who really got the crowd going.

At dusk we walked through the quaint main street of Bridgetown and turned up the hill to the Bridgetown Cidery where we sat outside in the fragrant rose filled garden and listened to accomplished Ivan Zar as we sipped on pints of freshly brewed cider and gutsy dark beer when the rain finally stopped in the early evening.

The musical festivities lasted long into the evening at the designated venues, but also well into the night at the showground campsite where we pitched tent for the night. The atmosphere was laid back and there were masses of food stalls, craft stalls, beer tents and of course wonderful cider – being a Devon girl from the UK, I do like a sip of Scrumpy every now and then. Reminds me of some spectacular teenage hangovers.

Overall, the festival provided a whole variety of acts and bands … there was as the cliche goes … something for everyone … There were the seasoned musos, the up and coming, the reinvented, and the journeymen. It was a great showcase of local Australian talent flavoured with some overseas seasonings.

Have you been to any noteworthy music festivals this year? 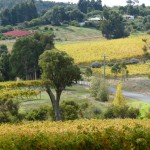