Once upon a time there was a faraway land steeped in magic and mystery.

A land of a thousand temples where people lived in harmony with the divine, the demonic and the domestic. A place were daily life was celebrated in architecture, music, art and festivals honouring the spirits. A place far away from the invasion of the Western World, some called it Heaven.

Not so far from Western Australia,  it’s a bit like Spain is to England when it comes to a holiday destination easily accessible from Perth.

That mystical land is the small tropical island called  Bali.

Yes, it’s still steeped in magic and mystery and it’s  still situated faraway at the end of the Malay Archipelago, less than ten degrees south of the equator, sandwiched between Java, to the west, and Lombok to the east. But times have changed and no more is it far away from the corruptions of the 21st Century.

Some people love Bali, others hate it, because over the years, like many other holiday destinations, it has inextricably altered, and any trip to Bali should come with a few warnings, that is if it’s going to be a happy holiday and live up to expectations. 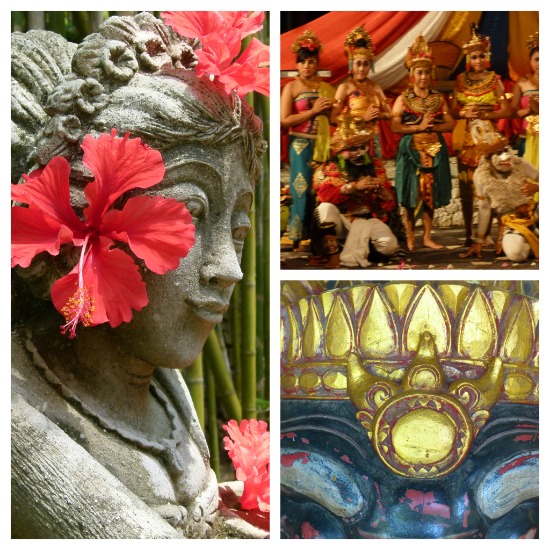 On the ethereal side of things, everyday life in Bali is woven with gods, demons and spirituality.  Physically the land  can be wracked by volcanic eruptions, violent seas and monsoon rains making the paradise often seem more like hell. Geographically away from the maddening crowds of the south the island is still lush, rice terraced and exquisitely beautiful, but there is an underbelly of darkness in Bali that wasn’t there when I first visited thirty years ago and perhaps it’s associated with the march of the western world.

Do I still want to visit?

Should my expectations of paradise be curbed. Absolutely.

One of the great things about living in Western Australia is that we are so close to this tiny tropical Isle making it a quick-stop holiday destination. Amazingly it takes less time to fly to its capital Denpassar, than it does to fly to any other Australian city.

Geographically Bali is just three and a half hours flying time from Perth, but because it is so different to everything Australian it feels  a veritable world away. It might in comparison be poor when judged by materialistic Western terms but it is rich in culture and art, and steeped in complex spirituality and mythology.

Arguably one of the most beautiful islands in the world its fertile volcanic soils give rise to what might be described as a tropical tsunami of flora.

The biggest plus is that you are just under four hours away from a completely different culture where  sights, sounds, smells and experiences are exotic and unfamiliar. Another primary benefit is that you’ll find that nearly everything is  less expensive than in Australia, and this goes for almost everything from food, drinks, trips and merchandise.

So what do you get?

An abundance of exotica.

Loads of interesting things to do.

Blue seas with gentle waves or if you prefer, good surf.

Less jellyfish than Australia, and they also say, ‘no man-eating sharks’ (but don’t quote me on this!) which is comforting for surfers, divers and snorkelers.

Incredible sights – imagine acres of neon green rice terraces and palm trees that stretch towards the heavens. The sort of green and verdant sights that are a gorgeous shock after the dry open spaces of WA.

5 Star hotels for less than the price you’d pay for a regular self catering cottage in Western Australia.

A playground of culture and also holiday excitement. Everything from 8th Century temples to water sports and elephant rides. You want it? Bali can probably provide it.

Hassle – at least once you’re outside the hotel gates.

Water that you shouldn’t drink from a tap.

An environment that is not as clean as somewhere as pristine as WA. 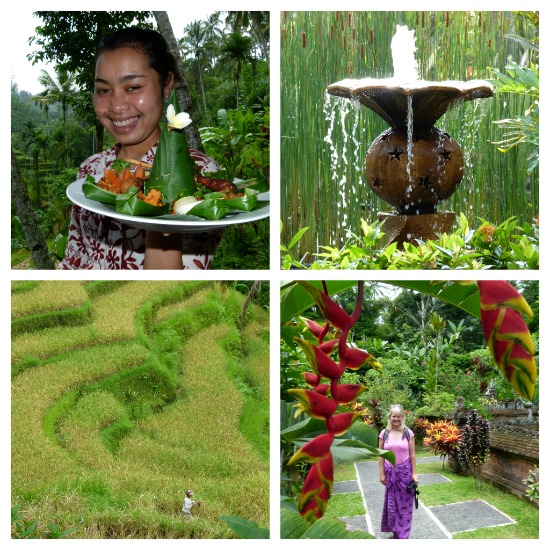 It’s surreal really to be flung in such a short time, from the wide open, clean spaces of WA into the hectic, bustling, crazy, incense filled, tropical, often dirty, third world.

Over the years I’ve become more of a Five Star Hotel Bali fan rather than Ketut’s-Kitchen-Stall-by-the- roadside-type-of- girl, which I  was, when  backpacking  in Bali in 1983, and how different it was then.

I think to way back then and I thought I’d found paradise. The quiet shack lined streets (yes even Kuta), the exotic smells ranging from frangipani to lemon grass, the unspoilt villages, the colours like a tropical aviary or an artist’s palette of sea blues and rice terrace greens, and the smiling friendly Balinese people, they all completely stole my heart. 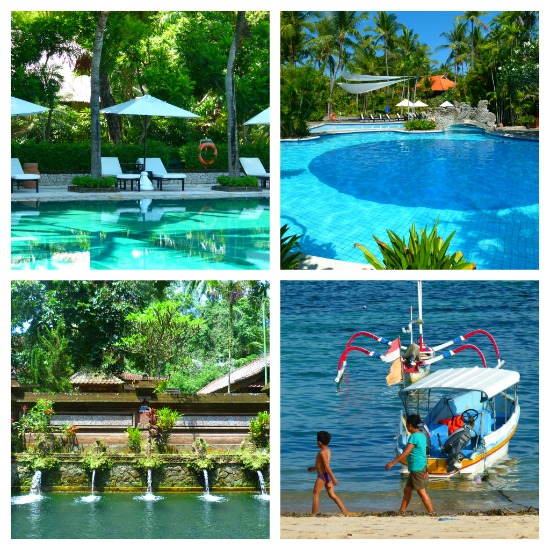 These days the Kuta area is a chaotic fusion of scooters, trucks, cars and people trying to sell you things. Anything. T-shirts, DVD’s, trinkets, gift items, illegal chemicals, girls … you name it, and it will be for sale. It’s the place where young Australians go to play on a shoestring (as they always have) but now it’s super hectic and not very nice anymore.

At Nusa Dua, the tranquil spot on the south coast that was created specifically as a haven for tourists (with fatter wallets) you can expect the Five Star Bali where hassle is taken out of the holiday equation. And it’s gorgeous, but be warned it’s likely to take you a long time to get anywhere else.

These days, travelling from Nusa Dua to the factory outlets or the beach at Kuta in a taxi can take anything from a respectable 30 minutes, up to two hours, and travelling to the artistic mountain village of Ubud took us over two hours. In 2009 we did the journey in 1.5 hours whereas in 1983 it took about 40 minutes.

Traffic aside, there are still glimpses of the old, magical Bali that I remember although you need to travel further afield away from the south and wander up the east coast or visit the black sandy beaches of the north.

Once you get away from humanity, everything in Bali is voluptuous, bigger and brighter than in other places. Bali induces superlatives. It’s been called the split gate to heaven and Garden of Eden . You’ll be surrounded by palms and giant, waxy red and yellow flowers which hang like sculpted carvings from banana-type palm trees.

There are lilies, big white affairs and smaller feathery ones. There are hibiscus flowers everywhere along with the ever present frangipani trees, their sweet, cloying scent hanging suggestively in the air, or perhaps wafting from right behind your ear as you are offered yet another bud with which to decorate yourself.

Daily life in Bali is indelibly linked to satisfying and appeasing not only the Gods but also the spirits and demons. There are approximately over twenty thousand temples dotted across this tiny tropical island and everywhere you look or don’t look you’ll come across small offerings of rice dedicated to both gods and demons; these are garnished with flowers set in small cupped palm leaves, and you need to be careful not to step on them.

You are likely to be stopped and tikka’d with rice on your forehead during a car journey into the mountains, and a prayer will be uttered for safe travelling, offerings might  be purchased by the driver and more prayers will be said. Both comforting, and a little disconcerting as you gaze down a mountain abyss. 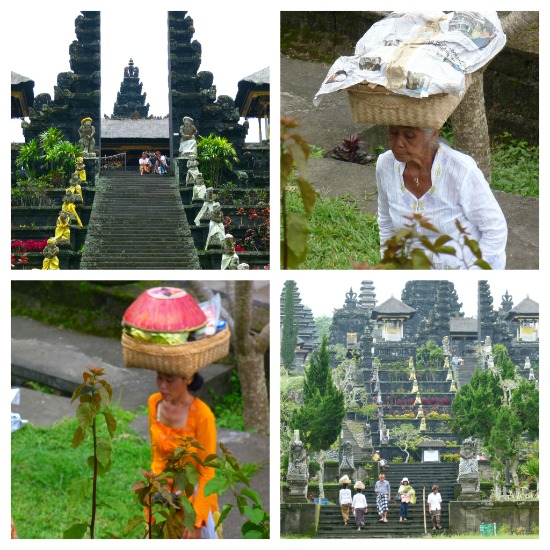 One day we visited the ancient Besakih Mother Temple located in the foothills of the still active Gunung Agung volcano, which erupted and spewed lava around the area in 1963.

Early in the morning when mist still hung over the mountainside it was peaceful, cool and other worldly. We encountered a few tourists, a Balinese prayer procession, and plenty of touts.

Be forewarned: 8th Century heaven has merged with 21st  century hell. For you pay to enter the area, you pay for the WC, you have to buy or rent a sarong, make a donation to the temple to get in, and pay a guide. And you have to bargain for it all excepting the official entrance fee.

Yes, there is always an ‘angle’ to obtain money from tourists in Bali, and you will have to decide whether this puts it into a heaven or hell category, because hagglers are persuasive and it can be wearing. At the very least you need to go prepared with patience and some degree of bartering power which takes into account both paying a reasonable price so that the seller can earn a fair wage, and on the other hand ensures that you are not heftily ripped off.

When to visit Bali

Just south of the equator, Bali has a tropical climate with two seasons a year; wet and dry. High season is between June to September when the weather is warm and dry. The average temperature is around 28 degrees Celcius.

Go, if you can before it’s really too late – the dry season is preferable, but the shoulder seasons just before the monsoon and after are less expensive.

Bali has long been confronted by disasters like floods and earthquakes, but the foreign invasion of tourism, that seems to be both its economic saviour and its spiritual slayer is ever present and there is evidence  of yet more huge hotels  growing like mushrooms. The island is getting busier, and I wonder how long the beautiful Balinese spirit can hold out against corruption.  The people, the land, their art and architecture are visual statements of the harmony in which the Balinese live with one another as well as with their gods and demons, but the inescapable march of the 21st Century is chipping away at this harmony, blow by blow from the southern part of the island upwards.

If you’ve enjoyed this post why not sign up for updates to Zigazag (it’s free) so that you can pop back for further posts about Where to go and Things to do in Bali. 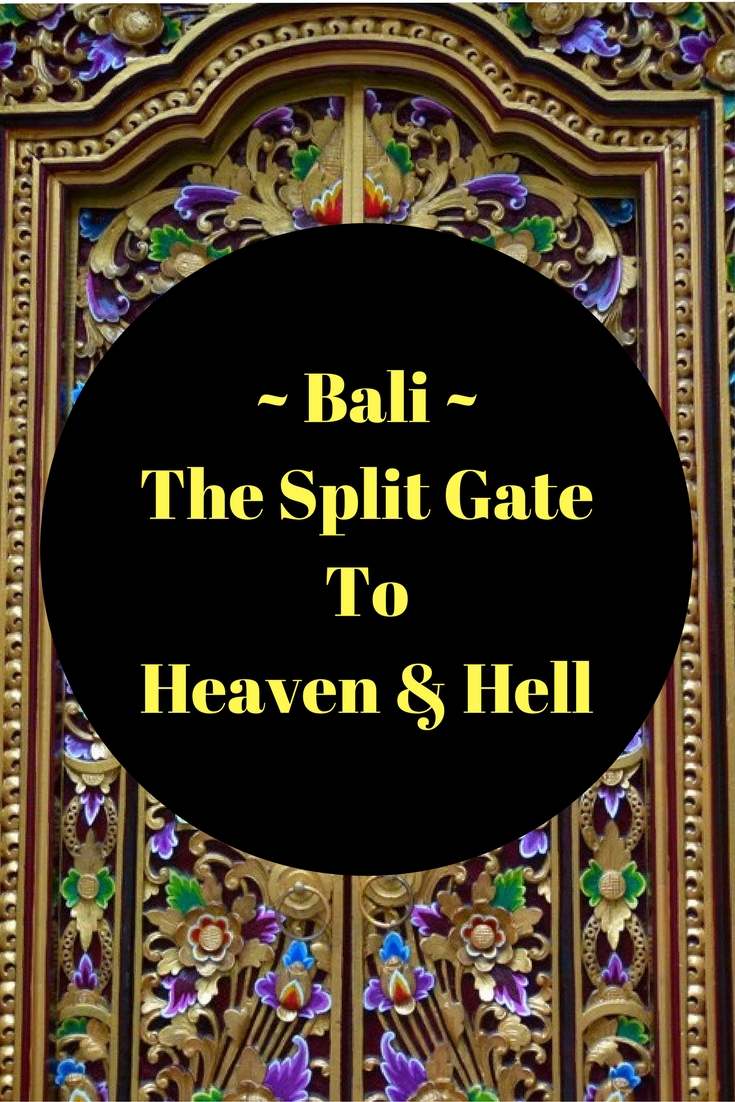 You might also enjoy:  29 Awesome things to see and Do and How to Create a Balinese Garden in your backyard. 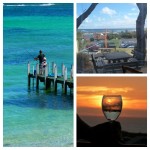 3 Funky Cafes in The South West 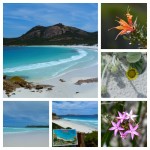