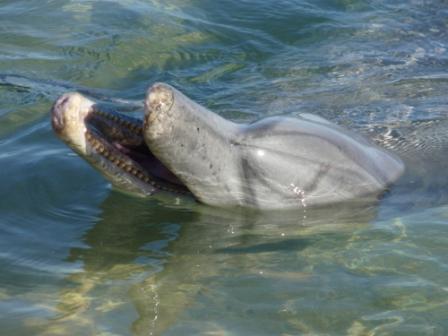 I was lucky enough to visit Monkey Mia recently, a great place for Western Australian holidays, where dolphins are one of the main attractions. A big bad road trip, from Bunbury, 2400kms in all took us through some of the most exquisite scenery of mid west Western Australia, not only sweeping flat vistas and very distant horizons (which I was expecting), but also (to my surprise) a fair amount of rolling pastoral scenes along with plenty of swathes of ice-cream coloured wildflowers and electric yellow acacia trees. In fact as we drew close to the small town of Kalbarri, we could have been driving into Ireland. Who’d believe that the fields could be so emerald green after only four inches of rain?

They say that Western Australia has escaped the worst of the worldwide recession, but it’s definitely not escaping drought conditions this year. The amazing thing is how little rain this dramatic land needs to put on a colourful show.

About 850 kilometres north of Perth along the almost dead straight North West Coastal Highway, you come to Monkey Mia, an area which is part of the awesomely wild and unpopulated world heritage site that comprises Shark Bay. After several hours – stints of driving and playing with my new mobile phone I began to get excited. ‘Are we nearly there yet’ I kept thinking because I was going to meet Flipper, well a whole load of Flippers as it turned out.

What is it about dolphins? It’s hard to explain, but as they came into shore to feed, and swam right up to our ankles, I was shaking so much that I had to steel myself to take photos.  It’s true, there’s something mystical, and spiritual about these intelligent, mammals with their gentle demeanours cute looks and big brains.

Meet Nicky, Fin her calf, Piccolo, Surprise, Puck and Shock, Indo-Pacific bottlenose dolphins. They smooched up to the rangers, flipping over onto their sides to get a better look at us silly humans standing in a row along the waters’ edge, most of us knee deep in the water. Then they made a big show of being playful – they lolled, flopped, rolled over and eyed-us up in order to get their grub. Each dolphin has her own bucket (how cute is that?) with a weighed-out, designated amount of fresh fish. At Monkey Mia they are allowed three feeds a day – only the females are fed because those pesky males tend to herd the females and become aggressive, but some of the female dolphins have been coming to shore to the exact same spot for over 30 years. 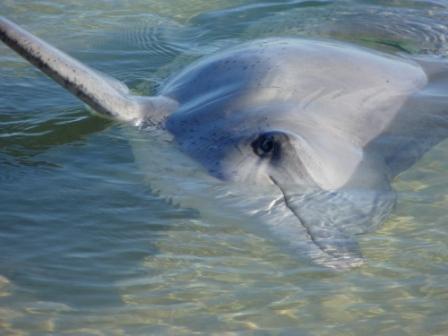 When the feeding is over, the buckets are washed out to signify the end of the session, and the dolphins take this as a sign to swim back into the ocean to find their own fish and to feed their young. Nicky, so named because she has a nick on her dorsal fin caused by a boat propeller, is inclined to be an irresponsible mother, the rangers told us … the sort who might leave her child in the car park at the pub while she goes in for a few beers! She hung around after the three feeding sessions acting cute hoping for more, while her baby kept nudging her as if to say, “Come on Mum, take me out to sea so I can have some grub too.” The rangers explained that the dolphins have to be in deeper water so that the calves can get under the mothers to suckle.

Well I did manage to take some photos in the end, and also found out some curious dolphin facts. 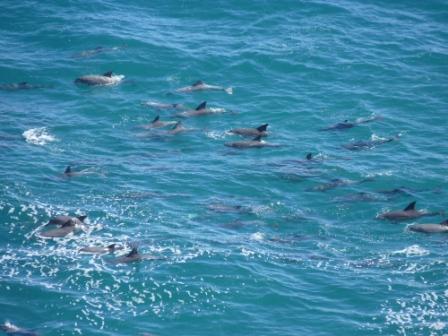 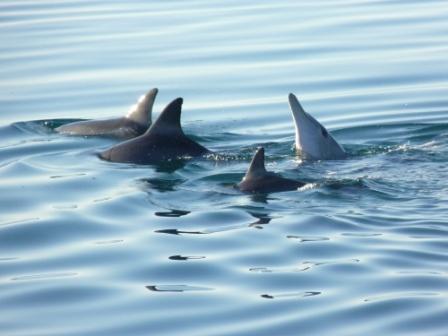 Whales and Dolphins in Bunbury 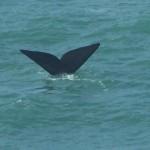 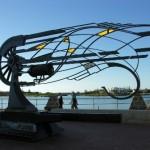