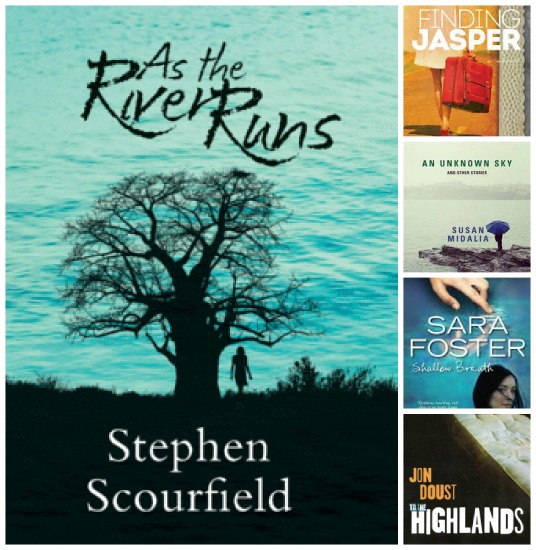 I know I do. There’s nothing better than curling up on the couch, or in this weather, under a sun brolley and having a lazy hour or two with your favourite author.

Western Australian Authors in the news

The Perth Writer’s Festival is over for another year, sigh.  It’s a wonderful event for both readers and writers and gives you the chance not only to discover new writers but also the chance to listen to authors speaking on a wide range of topics.

It was great to see Western Australian authors featuring prominently this year, and some of them have written fabulous and acclaimed new novels.

Stephen is Editor of the West Australian Newspaper’s travel sections and he’s been traveling in the Kimberley region for over 30 years. ‘As The River Runs’ is his latest and second novel about the Kimberley. It’s a powerful ode to one of Australia’s most remote and stunning areas.

“As the River Runs is set in the Kimberley and the central storyline is about the prospect of a dam on a major river in a gorge within a conservation area. But that is just the “example” – more broadly it is about pressure on landscape and how we use it, and how we make decisions about that. Who is involved and who is affected”

At the Perth Writers Festival I listened to Stephen chat on a panel discussing “Landscapes of the Imagination” and how important the natural world can be in stimulating creativity. For Stephen, who hails originally from the West Country in England, the stark beauty and the wide brown land of the Kimberley has become ingrained in his veins.

“I came to Western Australia as a young man and was soon exploring the Kimberley. I found I had to learn the place from the ground up; from what people wear, to how they behave, what they drive, the colour of the country and its flora and fauna. I’ve been to the Kimberley at least a hundred times but I still consider myself a visitor. If you take the traveling experiences that I’ve had there, you could liken them to a 44 gallon drum of experience. However it takes a huge drum of experience from which to make a tea cup of prose.”

A member of the audience asked: “Does physical landscape give you inspiration would you say, or is it just that a beautiful landscape relaxes us sufficiently for inspiration to strike?”

“I write a thousand words a day. When I finish my words on say, Madagascar, then I drop straight into writing my novels, so I actually carry that ‘space’ of being relaxed enough to write with me, all the time,” Stephen said.

“My new novel is published alongside a previous novel, Other Country (now it its third edition), set in the same area but 20 years ago before conservation tourism, Aboriginal ownership and diversification really affected this part of the Kimberley. So essentially Other Country is the “prediction” followed by the “outcome” in As the River Runs. Together, the two books represent 15 years of writing and nearly 30 years of travelling in the Kimberley, and thought about these issues. The books are in bookshops, and the publishers are also selling at usual retail price with free p&p to anywhere in Australia at these links: Other Country and As The River Runs.”

Susan Midalia is a writer and freelance editor who also facilitates short story writing workshops. She grew up in the West Australian wheat belt but has spent most of her life in Perth.

I listened to Susan speak on a panel at the Perth Writers Festival on the subject of “Wanderlust”.  The panel was asked, why do we travel? Is it a search for identity or connection? Watch out for a future post on ZigaZag when I’ll be bringing you some of the quotes from this session.

Susan’s second collection of short stories  ‘An Unknown Sky’ offers a variety of characters all of them ‘travellers’ in search of connection and belonging.

Having two children of my own who have recently flown the nest made me particularly perceptive to the opening story in the book, and Susan explained further.

“In An Unknown Sky’s cover story I write about the dichotomy of the moment when you see your child off to see the world; firstly there is a feeling of great pleasure, but there is also some reservation. On the one hand you want them to see the world and you’re happy for them but remembering back to your own days of youthful travel you also have a sense of their great vulnerability.”

“Susan Midalia’s second collection of short stories offers us a compelling variety of characters, all of them ‘travellers’ in search of connection and belonging. Tourists in Moscow and Vienna confronted by the weight of history. A young student teacher discovering her capacity for compassion. A teenage boy defending his mother’s reputation. A brother anguished by his sister’s illness. An ageing widow infatuated with a troubled young man. Conflicts between the silent burdens of the past and the drama of everyday lives. Written with eloquence, grace and emotional generosity, these stories seek understanding rather than judgement, inviting us to reflect on the unspoken longings and regrets that make up who we are.” UWA Books and Authors

Lynne grew up on an orchard in a small rural community in South West Australia. Finding Jasper is set in Perth and the southwest between 1945 and 1965 and examines the day-to-day lives of four women alongside global and local historic events.

Her first novel ‘Finding Jasper’ is a book I’m dying to get my hands on.

“The floorboards were hard and uneven as she knelt beside the Saratoga. Squeezing the corroded latch, Gin carefully eased open the lid, trying to predict the treasures inside. The lining was shabby and mottled with mildew, and drifts of mustiness filled the air as she began to unearth the contents from the shrouding dust. Mostly books, she found, a few toys, and a fat-cheeked doll lying naked on top. What had she expected?” Margaret River Press

Jon is a writer, comedian, professional speaker, big ideas inspirer and community projects facilitator who was born in Bridgetown. His previous books include Boy on a Wire.

His latest novel is entitled: To the Highlands.

You can find his blog here at Jon Doust.

“It is 1968. All around the world people are marching, protesting, fighting for freedom and free love. Jack Muir arrives in the islands fresh out of Grammar School: a failure, a virgin, and a reluctant employee of The Colonial Bank of Australia.Life in the islands is raw, sensuous, real. Here, the white man takes what he wants. But the veneer of whiteness is flimsy, and brutality never far from the surface.To be free, you must set free. So says George Kanluna, future leader of the islands. Yet there is a world of difference between freedom and those things you unleash in others – and in yourself,” Fremantle Press.

I’ve listened to Sara speak in 2012 and 2013 at the Perth Writers Festival, and she’s a young West Australian writer who has a knack for the compelling and her tight writing will keep you turning the pages.

Sara divides her time between writing, book editing and being a mum. Her passions include the natural world, photography and travel. Apart from her most recent novel she’s also written Come Back to Me and Beneath the Shadows, and she lives in Western Australia.

“How far would you go to save someone you love? Two years ago, Desi Priest made a horrific mistake and destroyed her family.Now, she is coming home to make amends: to her daughter Maya, who’s nurturing her own dangerous plan; to her brother Jackson, who blames himself; and to her close friend Pete, who has spent years shielding her from a devastating truth. But as Desi returns to her beloved house by the ocean, there is a stranger waiting for her. Someone who needs her help. Someone whose arrival will reveal a chain of secrets hidden for over twenty years.  And one by one the family will be forced to confront the possibility that they have somehow got things terribly, tragically wrong … Set across five continents, Shallow Breath is a novel of dashed dreams and second chances. But most of all it is a story about love, and what it really means to be free.” Sara Foster

Now it’s over to you fellow ZigaZagers … who are your favourite West Australian authors?

How to get the most out of a Writers Festival and a glimpse of a Perth weekend.

What A Beautiful Place For a Daydream. Busselton Jetty