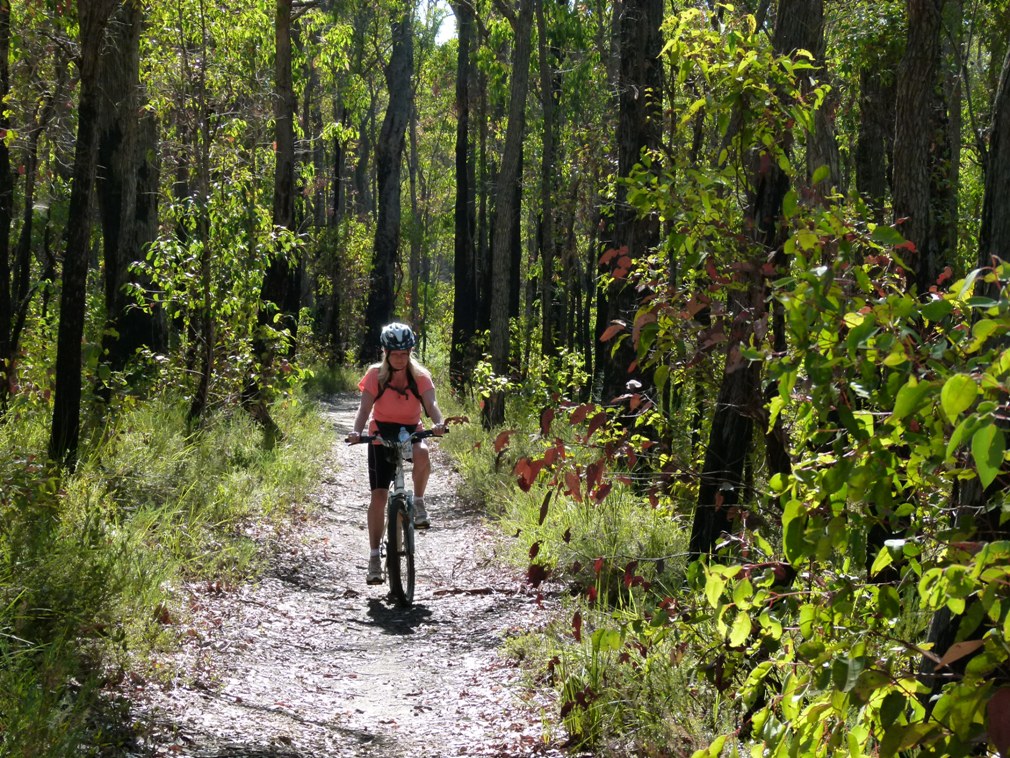 There’s more to Nannup than meets the eye.

The small towns of the South West remind me of a smorgasbord, the sort of buffet where you can’t decide what to choose first because it all looks so good. It goes without saying that each town in the South West has its own distinctive character and there is none of the mundane high street conformity denigrated by travel writer, Bill Bryson who has also said disparagingly, “We used to build civilizations. Now we build shopping malls.”

Things to do in Nannup

Travel to Nannup, 280kms from Perth, and you won’t find a shopping mall in sight. So what’s there to do in Nannup? 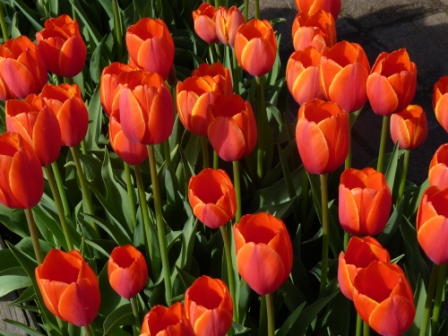 Nannup is situated bang-slap in the centre of the South West and is often referred to as ‘The Garden Village’, and as such hosts various garden festivals throughout the year.  You may imagine a small, verdant country village set amongst forests, offering enough to do for about a day, but what you actually get is all  that and more, for it’s a town with a big heart and if you enjoy the outdoors, there’s enough to keep you occupied for way longer than just a day.

The most appealing thing about Nannup though is the people. We were welcomed into their midst like long lost friends, and engulfed into the heart of the community within just hours of arrival. Attending a Rachel Taylor concert at the nearby Lavender Farm was a bit like attending an exclusive event by private invitation only because although we were ‘blow-ins’ everyone wanted to chat.

“We make our own home brew, here, try a glass,” said Geoff digging deep into his Eski filled with wine and ice. It was more than a home brew, it was a delightful red wine, a blend of shiraz, grenache and merlot.  “Drop in on us next time you’re down,” he continued. “Come see what we’re up to.”

Sitting on an elevated wooden deck on a hot summer’s evening, overlooking vast fields of fragrant lavender, surrounded by the hills and forests of the Blackwood River valley, and enjoying the dulcet tones of a talented, local singer songwriter, was priceless. But it wasn’t pricey. $15 each for the concert tickets, at a BYO venue, with a tasty selection of eats and treats  – we munched on a ‘Lavender Picker’s Platter’ of cheeses, olives, and dips that cost just $12.

“We have a place just outside of Nannup, Willerin Rural Retreat, why not pop by?” invited Derek, and as the sun went down so we collected phone numbers and  addresses of new friends who were once engaged in professions such as architecture and surveying but who are now making a go of the country idyll in true ‘tree changer’ fashion. It was almost enough to make us want to sell up, pack up, and follow suit.

Nannup is not like Margaret River, Pemberton or Bridgetown but it is similar; peaceful, pretty and cycle friendly. The Munda Biddi trail runs right through the town and there’s a suite of cycle loops to explore. We rode along the old Timberline Trail which is a little tricky in places, but which takes you along a forest trail with dappled light where the only sounds are the rustles of lizards in the undergrowth and birdsong coming from the lofty jarrah tree tops above. Not a car within sight or sound.

Beginning at the railway bridge over the Blackwood River in Nannup, The Old Timberline Trail is a 22 kilometre walk and mountain bike route that ranges from a twisty track to a road and rail line once used to remove logs from the jarrah forest.  There are hilly sections and in some places the trail thins to a narrow, bumpy path. If you’re feeling energetic you could go all the way to Cambray Siding, but check with the visitor’s centre first to make sure that all sections of the track are open, and obtain a detailed map. 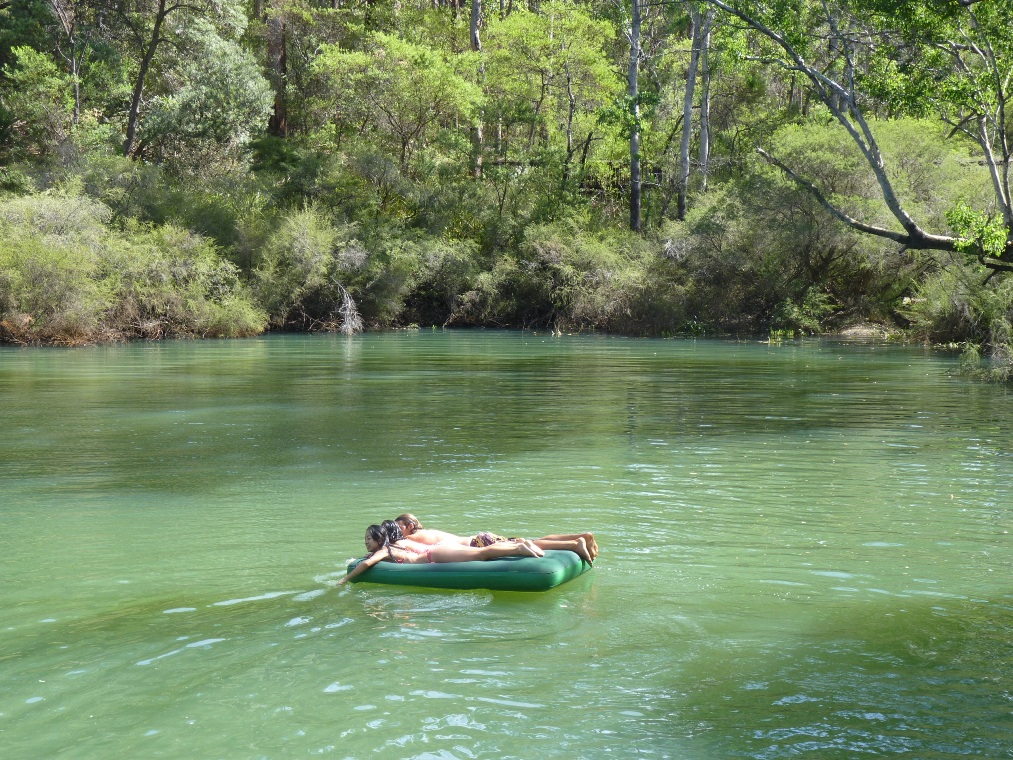 Along the way we stopped at the remote  Worker’s Pool for a cool-off swim and then cycled on to the larger Barrabup Pool, where the water was a shade of jade so green that it completely put to shame the summer vegetation, much distressed due to this season’s lack of rain.

In Nannup the shops close on Sundays and you’ll be lucky to get an order in at a restaurant after 8pm on a Saturday. But that’s part of the charm. The pace of life drips slow here, you get the feeling of being in settler country where little has changed since the village was founded in the 1850s, and you get a sense of being entirely off the beaten track.

For me, secret places are just the best. The feeling of being somewhere that is either unexplored or out of bounds is inextricably linked to the most exciting stories and fables, and brings with it the notion of adventure. Situated on top of a wooded hill above Grange Road, on four acres of land and entirely hidden from view is Holberry House, a guest house built like an English manor. The gardens are peppered with statues and sculptures set amongst a woodland of jarrrah trees through which Mount Folly Creek flows. For a small (courtesy) donation at the main gate you can explore the extensive gardens without overnighting at the B & B, and walk, sit or just daydream. I chose to daydream a little, thinking it the sort of secret garden where you might expect May Gibbs’ fictional characters, The Gumnut Babies, Snugglepot and Cuddlepie, to peep out from behind the bushes. 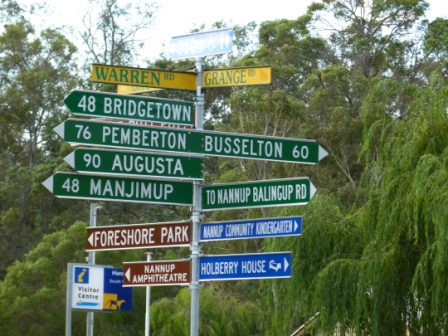 The indigenous  Nyoongar people originally gave Nannup its name, which means, ‘stopping place’, and its position in the middle of the South West makes it an obvious place to stop, as it’s situated on the Blackwood River midway between Busselton and Bridgetown, Margaret River and Pemberton, Augusta and Balingup. Nannup is convenient and central for an overnight stay and it was probably the very reason that we met friendly members of the Harley Davidson Owners Group from Perth who, along with 30 other bikers, were on a tour of the South West.

But in Nannup, it feels as if there’s a secret undercurrent, and much more to the town than meets the naked eye. For you might perhaps imagine, on a night with a full moon, that you can hear, not the rumble of a Harley engine,  but the rumble of travelers past who paused to rest their horses and bullocks in the village as they moved their stock and their wares from inland settlements to the coast and back.

Out and About around Nannup

For a feast of tulips and daffodils head to the Flower & Garden Festival which runs in August each year – flowers a-plenty in the main street along with garden and craft stalls, vintage cars, quilt and craft displays, and entertainment. 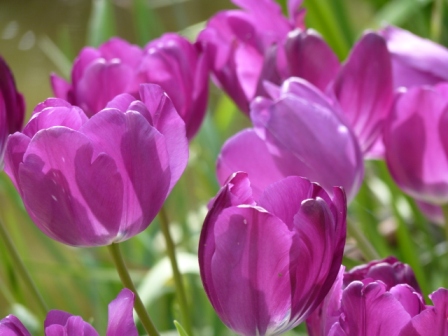 The South West region in springtime is a peak time for flowers, and in 1999, the Festival of Country Gardens was conceived to showcase gardens in the area.  Sponsored by the Water Corporation of WA and Shire of Bridgetown-Greenbushes the festival takes place in October and November. The 2010 Festival included a total of 18 open gardens in the regions of Balingup, Bridgetown, Boyup Brook, Manjimup and Nannup.

It has to be said that Nannup is blooming lovely during early springtime, and if you’re snappy you can expect some kaleidescopic photo opportunities with tulips generally flowering well into September providing there are not too many hot spells.

Of course, as I’m walking around discovering secret corners, I’m anxious to spot a legendary Nannup tiger lurking somewhere in the undergrowth. The last known Thylacine died in Hobart Zoo in 1936, but there has been some excitement concerning more recent sightings, and there have, allegedly, been tales of Nannup locals painting suitably coloured stripes on sheep.

But does it really exist?  “Is it myth, fact or legend,” I ask Louise Stokes, owner of Holberry House . “The viability of the Nannup Tiger or Thylacine seems to have been reignited,” she tells me, “and the question is now being asked, when will one be found, rather than, does it exist?”

What to do in Nannup 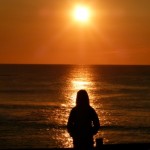 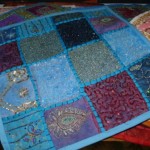