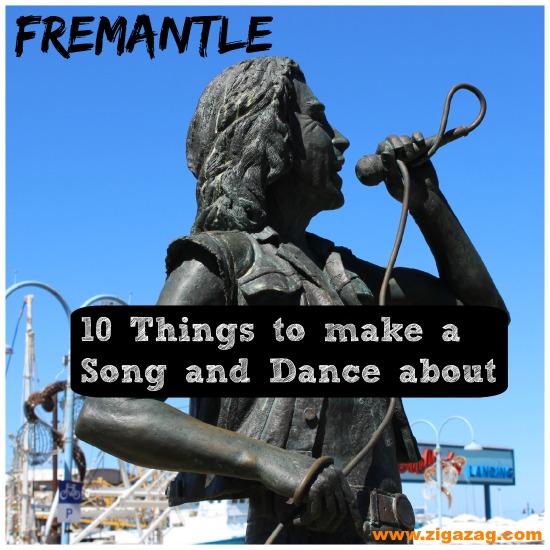 Fremantle is a surprise. I never tire of wandering around its historic streets. It has a totally different ambiance to Perth, which is so close in distance, yet so far in character.   Freo is quaint and quirky with old buildings which line the streets in faded glory giving a glimpse into life in days gone by. There’s history on display. You don’t have to seek it out.

But Freo is modern too. There’s a thriving arts’ scene, fabulous restaurants and a vibrant weekend market in front of which you’ll generally find a performing street artist or two.

I’ve written about some great things to do in a previous post :13 Fabulous Things to do in Fremantle on a Long Weekend, so today I’m going to write around Different things to do. Things you might not necessarily know or find out about on a first visit.

A weekend in Freo

We had to go up to Perth on business and decided to overnight in Fremantle instead of in the big smoke itself. We had no plans, no agenda, but just wanted to soak up the sights, sounds, and smells of Freo and let the city awaken our senses again. Which it did.

The first freewheeling quest we gave ourselves was to explore the public sculptures which are dotted around the streets at various vantage points.

Fremantle boasts a plethora of historical and quirky sculptures which preserve a sense of history and display the esoteric creativity which abounds in Freo. 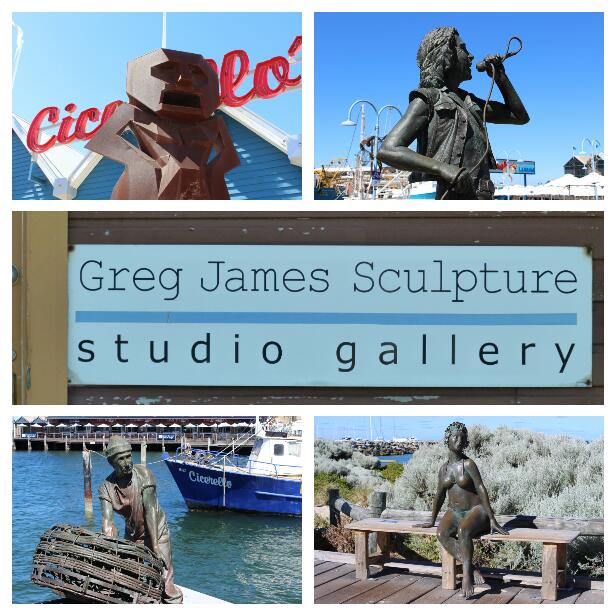 Some of the statues we discovered include Bella a life size bronze bathing beauty seated at the entrance to Bathers Beach just off the waterfront. The sculpture is created by iconic Fremantle sculptor Greg James.

Other sculptures by Greg James include the Coastguard, outside of the seafood restaurant Cicerello’s, which is a huge steel sentinel looking out to sea. Along the waterfront there’s the Fishermen statue, and also a statue of Bonn Scott Jovi the iconic ACDC frontman rocker who hailed from Fremantle. 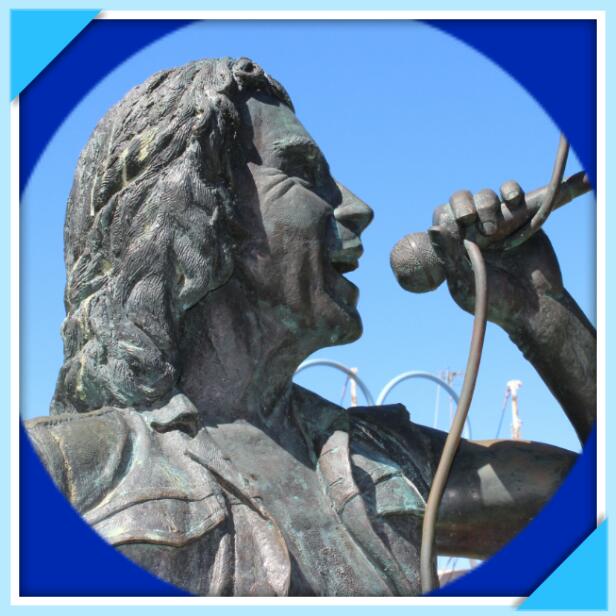 You’ll also find a beautiful series of sculpures of Greg James interpretation of blossoming womanhood at historic Fothergill’s B & B.Near the entrance to the Fremantle Oval is a bronze of a great Aussie rules player rising to take a flying mark. We were lucky when we discovered this piece of art as we wandered free into the oval to watch The Dockers in pre-season training.

The area around the Church is a wonderful place to while away some time with  morning markets, public table tennis and giant chess under a magnificent shady fig trees.Freo has some great street art too and it’s fun to wander the streets taking in the local creativity on display.

We found no street art more impressive than the incredible fresco at East West …. we found out that artist Graham Richards has been working on this fresco for more than a year and is still painting. It covers the entire length of the East West emporium – more than 100 metres in length. 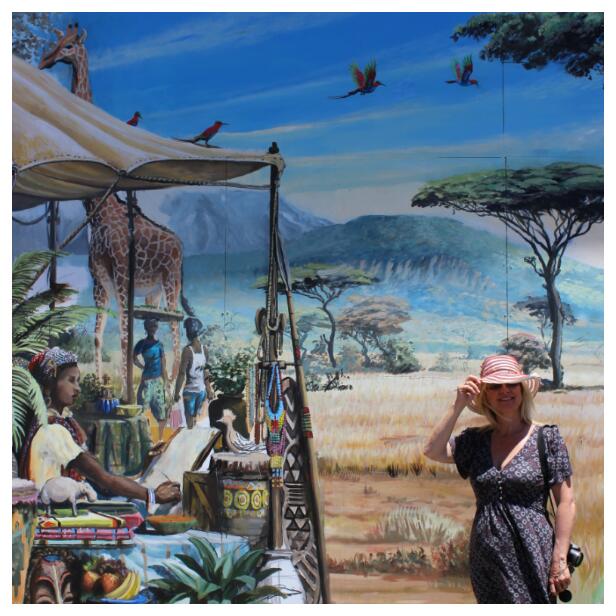 Various scenes are depicted from the parts of the world where East West sources it’s furniture and collectibles; Africa, India, Hong Kong, the Far East and the sub Continent. The fresco is bursting with colour and it transforms you into worlds far away with quirky humour and insights.  Should not be missed and nor should the pandora’s box of furnishings and collectibles inside this gigantic warehouse. 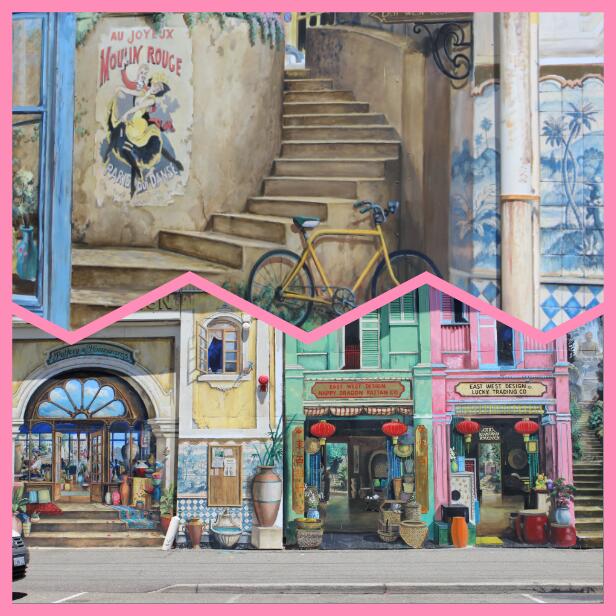 There’s plenty of other cool street art displayed on shops and facades around Freo too. One of my favourites is the psychadelic zebras on the wall of Oolong Cafe. 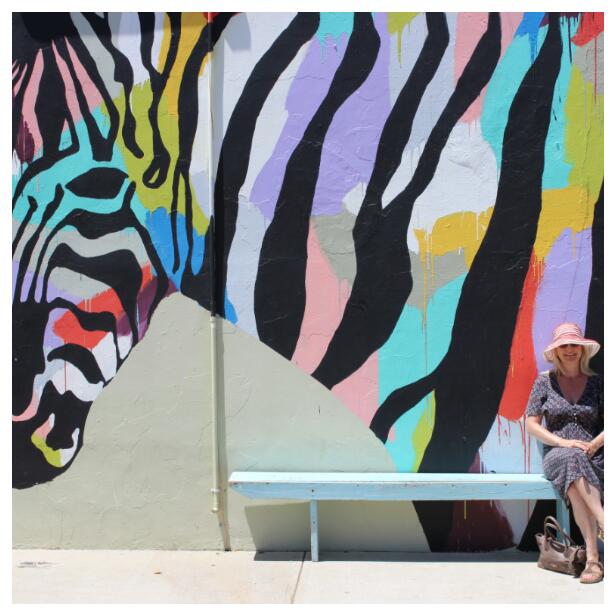 Tramping the streets and taking in the flavours you can’t help but be tempted by the abundance of coffee shops and cafes at every twist and turn in the city and on its outskirts. Freo hosts unique cafes where you can put up your feet and enjoy the passing parade sipping on fair trade coffee and home made delights or raw food. 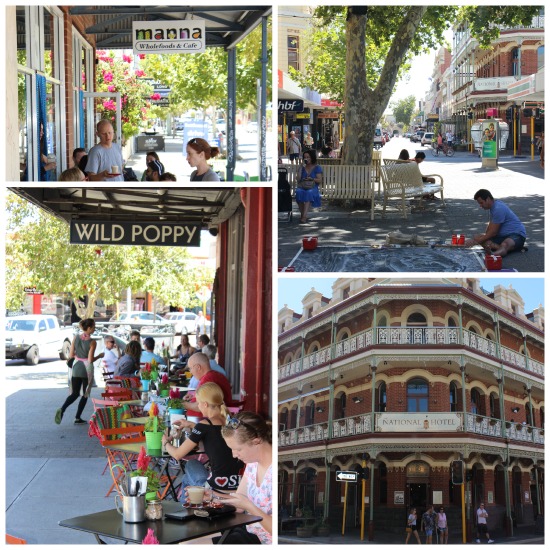 Some that caught our eye were Poppy, Bread, Oolong, Kand (with pretty sofas) and we had breakfast at Mill House.There are lots of places to eat at night. We chose one of our favourites CharChar Bull sitting on their balcony overlooking the fishing harbour as the sun set. 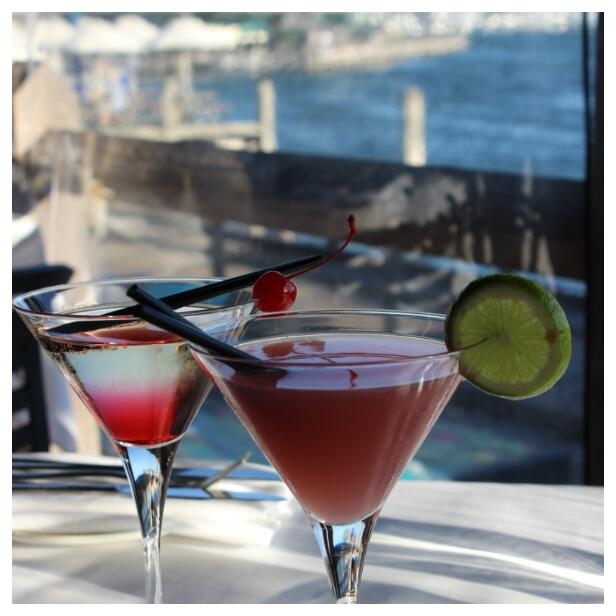 We started off with a couple of cocktails; a champagne cocktail and cosmopolitan. Although CharChar Bull is renowned for its steaks, we chose seafood; scallops, mussels and salmon.

Where to wine and dine

There are lots of other seafood places to eat along the waterfront including Kailis, Cicerellos, and The Mussel Bar.

Perth can be pretty hot in the summer but Freo is blessed with a cooling sea breeze affectionately known called the Freo Dr, but if you need to cool off there are plenty of options in the vicinity, from Bathers Beach set right in the heart of Fremantle with cool boardwalks and cafes, to the beaches further south; South Beach and onto Coogee. The colour of the water in summertime has to be seen to be believed. 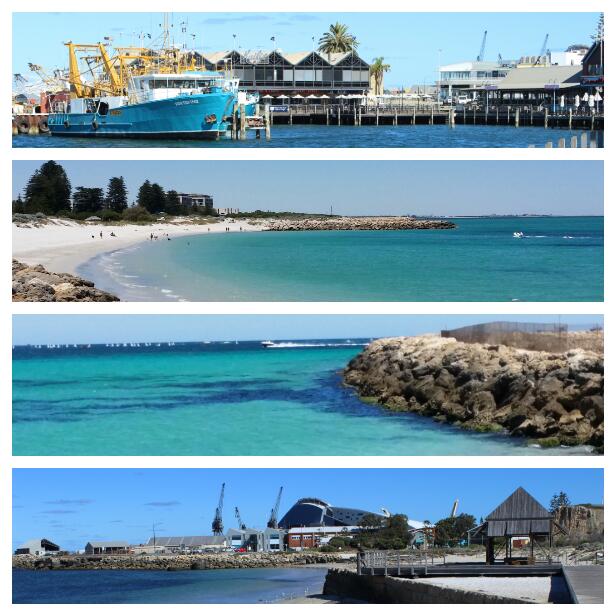 There are plenty of accommodation options in Freo and we were very lucky to be hosted at the newly opened 30 Arundel (Tel: 0419 171 268) that’s a renovated and reconstructed turn of the century cottage which has 7 modern ensuite bedroooms finished off with beautiful old pieces –  the bedheads are made out of the old floorboards from the main cottage. 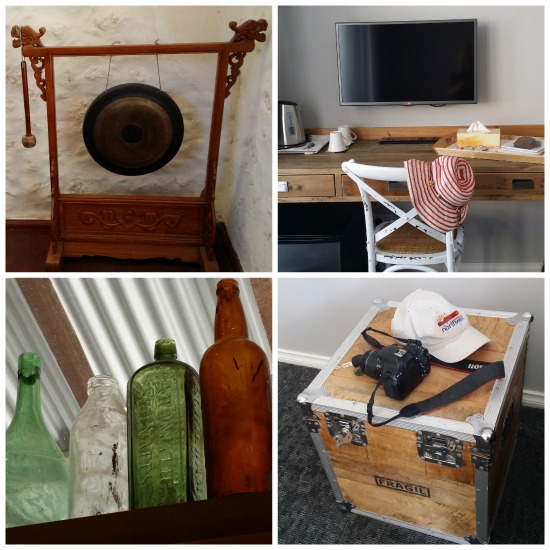 There’s a Swimming pool with a stunning and unique mosaic bottom, created by Paul the owner. 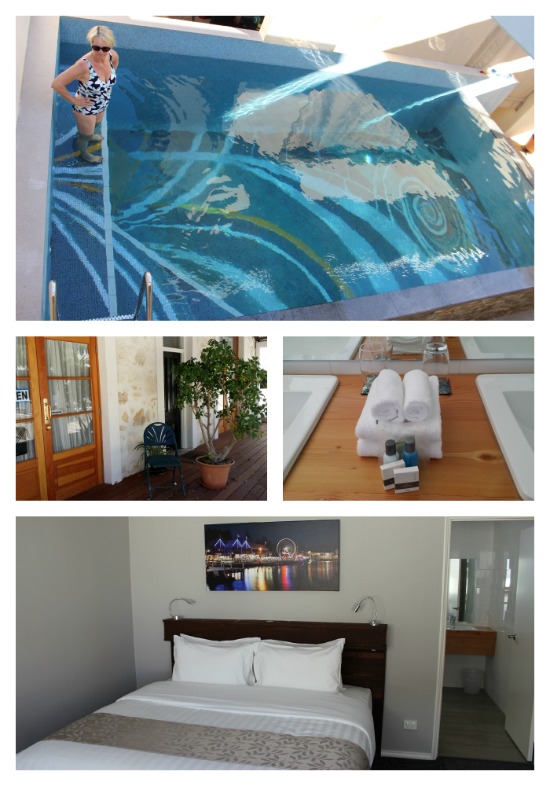 There are other thoughtful touches which have been built into the building specs which Paul told us about:

“I’ve always disliked having suitcases and wardrobes in hotel bedrooms with all your stuff getting strewn around. Why not have a suitcase stand, hooks and a wardrobe in the bathroom, in the actual place where you are more likely to want to get changed, as you come out of the shower? So we decided to make the bathrooms into spacious wetrooms with a dry area used as a dressing area.”

On our travels we discovered the newly built and innovatively designed  skateboard park which was teeming with youthful young athletes honing their extreme moves beneath Freo’s Big Wheel. 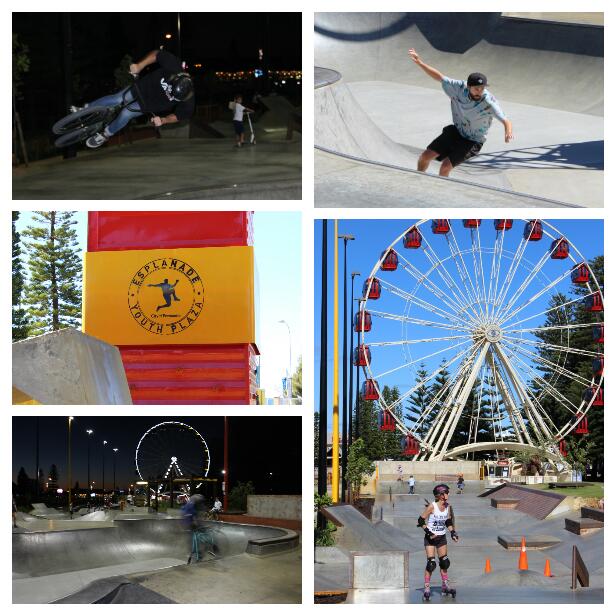 This is a really cool place to watch the world go by and stunts in the making – another form of Freo’s creativity. 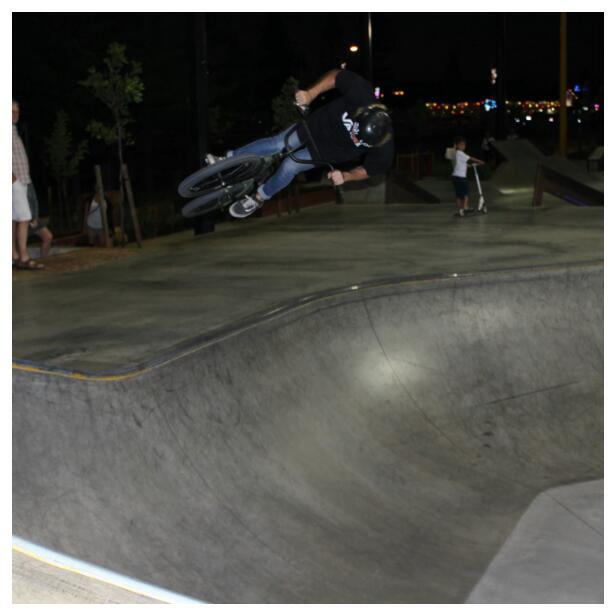 The street art in Freo really blew us away on this visit. I’m sure there are other great places in the world where street art is fabulous – so tell us – where is your favourite piece of street art and what is it? 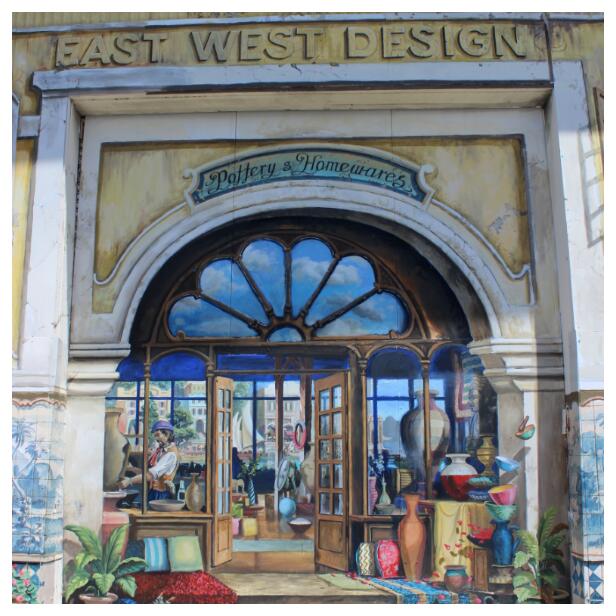 Disclaimer: My stay at 30 Arundel was complimentary but all views are my own.
Please follow and like us: 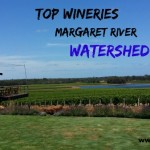 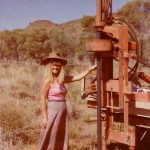 Sponsored Video : Discover the Northern Territory in a Campervan